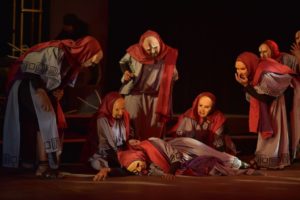 The abode of Cadmus was burnt to ashes because of the wrath of the Gods. After a long struggle Cadmus and his later posterity came to power one after another. At one point Oedipus came to the throne of Thebes. But predestined suffering dragged him to the brink of the formidable sin, and execution of the Oracle came true without his prior-knowledge. The Oracle said that he was destined one day to kill his father and to become his own mother’s husband. At the end of the play, after the truth finally comes to the light, Jocasta hangs herself, and Oedipus, horrified at his patricide and incest, precedes to gouge out his own eyes in despair. Then on an empty space the Chorus repeats the common Greek maxim, that ‘no man should be considered fortunate until he is dead’.

Staging the Theban play, King Oedipus, the first and the best one of the Trilogy, of the great master playwright Sophocles was a challenge for me. I read Oedipus and other plays more than a 100 times. In every read I was thrilled, mesmerized and spell-bound by the knitting of plots and use of the riddles, and the power of the unwritten. References to eyesight and vision, both literal and metaphorical, are very frequent in all three plays of the trilogy. Quite often, the image of clear vision is used as a metaphor for knowledge and insight.

A graduate from National school of Drama, Ashim Das is the Director of Fame School of Dance, Drama & Music, Chittagong, Bangladesh. He is an Assistant Professor of the Department of Dramatics, University of Chittagong, Bangladesh. Has directed and designed more than 80 plays. He has adapted a number of classics and written some plays for children. Ashim has conducted several workshops on acting and direction, organized by Bangladesh Group Theater Federation and others. He has traveled to UK and France on the invitation of Human Rights Forum, UK, and Marie de Paris. He received the Zakaria Smriti Padok and the best director award for the play The Madwoman of Chaillot in International French Drama Festival, Dhaka.

Sophocles (496-406 B.C.) born in Colonus, not far from Athens, was one of the best dramatists in his age. Sophocles tragedies gained recognition as among the best dramas written at a time when competition was at its highest. The fact that his works are studied today, approximately 2,400 years after they were written is a testament to the power of his words and the impact that his stories have on current culture.

Fame School of Dance, Drama & Music was established in 1998 at Chittagong. In addition to other courses, it provides a year-long theatre appreciation course in acting and design, and a short course on acting, inspired by the teaching methodology of NSD. Some of the plays staged by the group include Antigone, Catastrophe, All That Fall, The Leader, The Lesson, A Trilogy (Oedipus, Oedipus at Colonus & Antigone), Raktakarabi, George Dandin, The Mad Woman of Chaillot, etc.