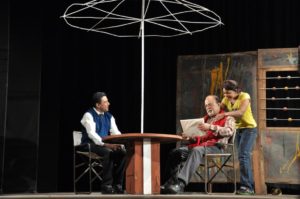 Catherine, a troubled young woman of 25 spends years caring for her brilliant but unstable father, a famous mathematician. Following his death she has to deal with her own volatile emotions, the arrival of her estranged sister, Claire, and the attention of Hal, a former student of her father who hopes to discover valuable works in the 103 note books that her father left behind. Over the long weekend that follows, a burgeoning romance and the discovery of a mysterious notebook draws Catherine in to the most difficult problem of all – how much of her father’s madness or genius does she inherit!

The first reading of the play Proof written by David Auburn had a mesmerising effect on me. The second made me love it. And the subsequent readings slowly but steadily arouse in me the desire to stage it in my language. Thoughts of adapting it to Indian situations, I found, was unnecessary. Male chauvinism is a great leveller. The content of the play amply exposes the same being prevalent in a very developed country too. I therefore thought of translating it in my language with hardly any alteration. Some small changes were incorporated though to adjust them to Indian values. I decided to go for minimum set- light- music for more than one reasons. Such a poignant content demands soulful acting. And to bring out the best in all my actors we rehearsed for more than a year before the inaugural show. My actors were encouraged to argue on any point of confusion, find out his/her own way guided by me. For music Beethoven came in handy. Set was designed simple yet meaningful. Doing this play was a very enriching experience indeed.

Arun Mukherjee, born in 1937, has been practicing theatre since 1955. Main director of theatre group Chetana, he has written many plays- Mareech Sangbad, Jagannath, Nirnoy, Putul Nacher Itikatha etc.. He is an actor and music director also. He toured USA, Canada, France, Norway and London as the leader of the troupe. He was a member of the delegation sent to Moscow film festival in 1978. He was awarded Bharat Puroshkar in 1978 for his acting in the title role of the film Parashuram directed by Mrinal Sen. He received SNA award for theatre direction. He has been awarded Dinobondhu Puroshkar by the State Government. A number of his plays have been published in Bengali, Hindi and English.