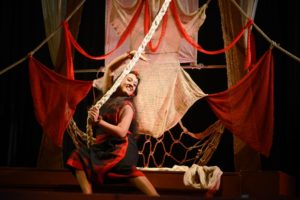 Saptaparnee is a collage of seven mono-acts shaped after seven women characters sketched by Tagore. They have been chosen from his novels, dramas, poems and short stories. A craving for love, and an unending search for fulfilment run through them.

Saptaparnee is a tribute to the creative genius of Rabindranath Tagore and his oeuvre. We find his texts extremely rich in nuances. They motivate us to read between the lines, to search for more and more meaning hidden underneath. Rabindranath has this rare ability to keep us together at a time which is out of joint.

Sima Mukhopadhyay, Director of Chandara, is a director, playwright and actor from Kolkata. She received Master’s Degree in Drama (Acting) from Rabindra Bharati University in 1985. At present she heads Rangroop.

Suranjana Dasgupta, Director of Kadambini, is a director, playwright, actor and singer from Kolkata. Suranjana made her film debut in Aparna Sen’s 15 Park Avenue. She has also acted in a telefilm titled Antigone Chatterjee with Anjan Dutta.

Adrija Dasgupta, Director of Malati, is a director, designer and actor from Kolkata. She received her PG Diploma-in-Drama (with Specialization in Acting) from NSD. Adrija is a committed theatre worker who keeps conducting theatre workshops and directing children’s productions for the economically deprived and physically challenged children.

Abanti Chakraborty, Director of Nandini, is a theatre director based in Kolkata. A Masters in Applied Linguistics and Translation Studies from Hyderabad Central University, Abanti had been a Special Fellow in Directing, at Yale School of Drama in 2010. In 2010 she received the Bismillah Khan Yuva Puraskar in Theatre Direction from Sangeet Natak Akademi.

Ishita Mukhopadhyay, Director of Ela, is active in Bengali theatre for more than three decades. Her first directorial venture was an adaptation of The Room by Sartre. Her group Ushnik was formed in 1984.

Sadhana Ahmed is a cultural activist and a poet-cum-playwright based in Dhaka, Bangladesh. Sadhana participated in various artistic movements that led to the fall of military rule in Bangladesh in the late-1980s. She was the Founder-President of Sparsha Abritti Parishad that operated from Bhairab. Sadhana Ahmeder Duti Natak, her first book consisting of Domer Madar and Maatbring, was published in February 2017.

Established in 1976 with a small set-up, Rangakarmee today spearheads the Hindi theatre in Kolkata with 43 productions in its repertoire. Rangakarmee has performed not only in India but also in countries like Pakistan, Bangladesh, Germany and USA.