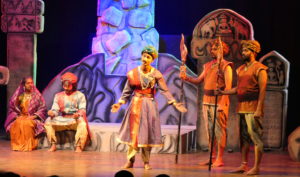 The Play
The story reflects the triumph of Ahimsa (Non Violence) against Himsa (Violence). The play begins with Bhagavatamela singing the story of Bharata and Bahubali, sons of the First Jaina Thirtankara – Rishabadeva to Chavundaraya, the Commander-in-Chief of the Western Ganga dynasty of Talkad. After hearing the story, Chavundaraya and Kalaladevi (His mother) wishes to go to Poudhanapura. The same night, Goddesses appear in their dreams and tells to erect a statue of Bahubali at Shravanabelagola . . When Chavundaraya made the elaborate arrangements to perform the abhisheka of Bahubali, the milk did not descend lower than the thighs. But when guru directed him to use for anointment the little milk brought by a pious old woman in a Gullakayi, it instantly ran down
all over the statue in streams and covered the hill. It is said that Gullakayajji or the Granny holding the Gullakayi was the Goddess Padmavati, who, in order to break the pride of Chavundaraya, appeared at the time of the anointment in the guise of a poor old woman. According to another tradition she was the mythological Kushmandini.

Director’s Note
The Play Gullakayajji written by Dr Chandrashekhara Kambara is unique in its way and is written on historical lines. At the times when communism and terrorism mock at the world, this play preaches peace and universal brotherhood. The caste and social hierarchy, which saddles in the Indian society too, is well used by the playwright to showcase the pureness in Bhakti and truthfulness which finally triumphs. The story revolves around the bonding of two brothers i.e, Bharata and Bahubali, their ego, war for supremacy, reconciliation and sacrifice. It on another side shows the unconditional love between Gulakkayajji and her grandson. Younger generation who are the pillars of the country should adapt the morals of this play which is to be carried forward for generations.
The Director Born in Konchigeri in Gadag district of Karnataka, Malatesh Badigera is a well known actor, director and organiser of Kannada theatre . After graduating from Neenasam, he has developed skills in large scale stage construction – costume designing, make-up and most importantly, in mask-making. Malatesh has directed several popular plays like Madhavi, Mahamayi, Tukarana Kanasu, Smashana Kurukshetra, Romeo Juliet, Surya Shikari, to name a few. In recognition to his talents, the Karnataka Nataka Akademi has conferred upon him the “Ustad Bismilla Khan “Youth award for the year 2006-07. Besides, he is also a recipient of Sammukha award, Antaranga award etc.

The Playwright
Chandrashekhara Kambara is a prominent Indian poet,playwright,folklorist, film director inKannada language and the founder-vice-chancellor ofKannada University inHampi. Kambara&#39;s plays mainly revolve around folk ormythology interlinked with contemporary issues, inculcating modern lifestyle with his hard-hitting poems. He has become a pioneer of such literature. After his post-graduation, he did his PhD fromKarnataka University,Dharwad. He has been conferred with many prestigious awards including theJnanpith Award in 2011, Sahitya Akademi Award, thePadma Shri byGovernment of India, Kabir Samman,Kalidas Samman andPampa Award. He has served as the chairman ofNational School of Drama Society, New Delhi from 1996 to 2000 and as the president of Karnataka Nataka Academy from 1980 to 1983. Kambara has to his credit 25 plays, 11anthologies of poems, 5 novels, 16 research works and several scholarly write-ups on folk theatre, literature and education. He was a pioneer in introducingBailahongal&#39;s famousSangya Balya (bayalata) andJokumaraswamy, a traditional ritual of his native district, to the literary world which have seen thousands of performances, not only in Kannada, but several otherIndian languages as well. His most recent novel,Shikhar Soorya, is rated among the best Kannada novels.