Life between Heaven and Earth 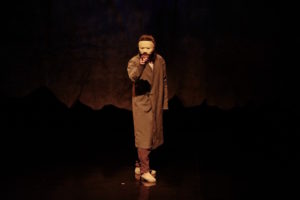 The Play
Life between Heaven and Earth was adapted according to the novel The True Story of Ah Q written by Lu Xun, a famous Chinese writer. It was a cold rainy night with a bleak autumn wind. A-kui was beheaded for the crime of &quot;Revolutionary Party&quot;. His soul, not dispersed, was wandering in Wei Zhuang, his living place before death. The spirit looked back on his short life and searched for the cause of his miserable fate. He consulted the wise men, asked the noble lords in Wei Zhuang, and even inquired from his enemy, but there was no result. He was confused by his funny death and hated the coldness of the world. Finally, the spirit of the dead, self-questioning in confusion and anger, sighed helplessly about the life between Heaven and Earth.

Director’s Note
Life between Heaven and Earth, this way, and that way…

Director
Liu Libin is the Chairman of the Executive Committee of the Central Academy of Drama; Professor, Doctoral Supervisor, and Executive Chairman of Performance Art Committee of China Drama Art Institute, Vice Chairman of Asia Theatre Education Centre (ATEC), member of the Art Review Group of State Degree Office and member of the International Committee of Theatre Olympics. He was awarded the Innovation Award and Golden Lion Award (Direction) by the Ministry of Culture. Creation of a Full Figure was awarded Beijing Municipal Excellent Course, First Prize of Beijing Education and Teaching Achievements, and Beijing Famous Teacher Award etc. Some of the plays directed by him are Thunderstorm, Beijingers, Three Sisters, Twelfth Night, As You Like It, Servant of Two Masters, Wet Paint, Turandot, Wen Na Came down from the Tree, A Cat Wants to Become a Man etc.

The Original Author
Lu Xun (1881-1936) is a famous Chinese writer, thinker, an important participant of the May 4 th New Culture Movement, and the founder of modern Chinese literature. He was formerly known as Zhou Zhangshou, and later renamed as Zhou Shuren. He was from Shaoxing, Zhejiang province. Lu Xun is the pen name that he used for the first time in the NovelA Madman’s Diarypublished in 1918.

The Playwright
Yang Zhankun, Doctor of Drama and Film Studies, and an academic visitor of U.K., who was once an undergraduate of Department of Dramatic Literature of the Central Academy of Drama in 1997, is now an Associate Professor, and Deputy Head of the Department of Peking Opera of the Central Academy of Drama. He has made many plays, TV series and films. His production of Life between Heaven and Earth, on behalf of Chinese team, was invited to participate in the 7th Theatre Olympics 2016 in Poland.

The Group
National Theatre of China (NTC), affiliated to the Ministry of Culture, is a performing art organization with rich resources on art creativity and splendid cultural traditions on drama. The theatre is formed by a group of well-known senior artists, such as Ouyang Yuqian, Liao Chengzhi, Wu Xue, Shu Qiang, Jin Shan and Sun Weishi who helped to lay a solid foundation during each stage of the theatre’s establishment, development, inheritance and innovation. National Theatre of China has three modern theatres which are suitable for varieties of performances. In addition, NTC has centres in Beijing, casting influence across the whole country, promoting international theatre exchanges and cooperation, and presenting national and international advanced theatre to Chinese audience.