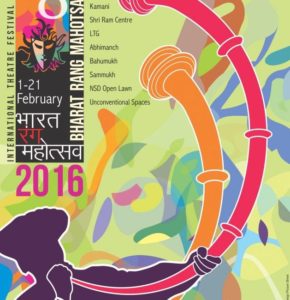 The 18th Bharat Rang Mahotsav commenced today in the capital with great fanfare. National School of Drama’s flagship festival, which is one of the biggest theatre festivals in the world, is being held in New Delhi from 1st to 21stFebruary 2016.

The inaugural ceremony took place in the presence of Shri N K Sinha, Secretary, Ministry of Culture, Government of India, while eminent stage and film personality Mr. Nana Patekar was the Guest of Honour. The evening was presided by Shri Ratan Thiyam, Chairperson, NSD Society and Prof. Waman Kendre, Director, National School of Drama was also present on the occasion.The inauguration was followed by the performance of MACBETH in Manipuri by Chorus Repertory Theatre, and directed by Shri Ratan Thiyam.

Bharat Rang Mahotsav this year promises to be bigger and better than ever with theatre groups from over 10 countries including USA, Australia, Italy, Sri Lanka, Poland, Bangladesh, Spain, China, Pakistan, Austria. Some of the finest names in the theatre world from India and abroad are set to be a part of the festival. The biggest theatre groups from almost all the states of India will also travel to showcase their talent at the festival. In a bid to promote theatre in other parts of the country as well, Bharat Rang Mahotsav will also be held at Jammu (Jammu and Kashmir), Ahmedabad (Gujarat), Thiruvananthapuram (Kerala), and Bhubaneswar (Odisha).

The performances will be held at Abhimanch and Open Air Theatre at the NSD Campus along with LTG Auditorium, Kamani Auditorium and Shri Ram Centre in New Delhi. Tickets will be available at NSD box office and at the websitehttp://eticket.nsd.gov.in/ in denominations of Rs. 50 and Rs. 100 at Open Air Theatre; and Rs. 50, Rs. 100, Rs. 200 and Rs. 300 at all other venues.