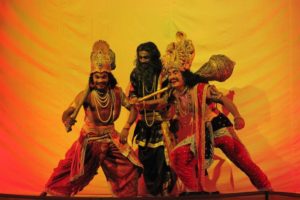 The Play
On the basis of the text of Mahabharatha along with the text of the play Kurukshethra by B. Puttswamaiah and P.Vajrappa, the masters of Karnataka company theatre, this performance has evolved keeping in mind the present times. It has been performed as Kurukshethra/Shri Krishna Sandhana all over Karnataka by P. Vajrappa and Kalluru Shrinivas. Their texts and songs are used in our production along with the poems of Kuvempu.

Director’s Note
In my native place, Thimmappana Halli and in surrounding villages, I enjoyed watching the enactment of Kurukshetra, Ramayana, Danashura Karna, Raja Vikrama etc. that were performed annually. When I came to Bangalore for my higher studies, my ties with company theatre were left behind. When I look back and think about how I felt then, watching company theatre, I feel amused. I wouldn’t miss even the all-night rehearsals of these plays. As I was a kid I wouldn’t get any opportunities to act but no one could withhold my opportunity to watch those plays. Saturdays and Sundays being holidays, it was my turn to look after the cattle. I used to rehearse these stories with my fellow cattle men. The mud from the wells that were being dug was our ‘Aharya’ (Make-up), the bamboo sticks were our bows and arrows, worn out plastic pitcher the weapons (Gada), the surrounding lakes became rivers and seas, the greenery was a dense forest, and we the characters of Ramayana and Mahabharatha. I had never thought that the games, which we played as kids, would become the texts for my future studies. Ninasam has taught me these playful games in our theatre course, but with discipline. In the year 2014-15 Ninasam trained students with different texts of Kurukshethra. Though the group was of young students, their singing and acting was of professional level. The nearby villagers came in crowds to watch this play. I had thought of doing this play much earlier for Janumanadata, but it couldn’t be possible for many reasons. Now, the actors Manju Sirigere, Nagaraja Sirsi, Sharath S Mysore, Uma Y G Kolara, Shrinivasa Murthy Tumkuru, along with the help of other actors and technicians, came together to recreate this play for Janumanadata.

The Director
Dr. M. Ganesh did his Masters in Kannada from Bangalore University. He completed theatre training at Ninasam Ranga Shikshana Kendra, Heggodu and then got appointed as a faculty at Ninasam. He received Doctorate from Kuvempu University for his thesis on Kannada Rangabhoomiya Hosa Sadhyathegalu (New possibilities in Kannada theatre). Being an actor, director and organizer, he has worked in many theatre troupes including Ninasam Tirugata, Charaka, Kinnaramela, Protheo, Spandana, Kagodu Rangamancha, Nanu Mandya and others. Sangeet Natak Academi awarded him with Bismillah Khan Yuva Puraskar. He was also awarded the best actor award for the movie Dhali in Bellimandala and Ambegalu film festival. Currently he is working as the Director of Shivamogga Rangayana.

The Group
In order to keep up the dreams of liberty, equality and fraternity, and to keep Ninasam training active and creative for two more months after completion of the course, a group Janumanadata was started and has been running for the past thirteen years. It was officially renamed Satyashodhana Ranga Samudaya in 2016. The group works under the leadership of Dr. M. Ganesh, the teacher at Ninasam institute, along with Ninasam pass-outs and other theatre lovers.