The Play
The play is a fictionalized version of the story of Aravasu, Paravasu, Yavakri, Vishakha and Nitilai from Mahabharata. Girish Karnad modulates the actual story to stress the social issue of casteism that existed then, and also to stress on the fact that a dedicated art performance is equal to the vedic yagna done by the brahmins to please the gods. The story revolves around power, love, vengeance and art. In the battle between selfless love and selfish ego the former succeeds.The play ends with a statement that the worth of man is evaluated from his actions and not from the caste he or she is born in. 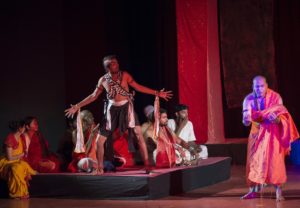 Glimpse from the play Agnivarsham

​​ Director’s Note
The major point which made me decide upon Agnivarsham is the ostentatious Hindu hierarchy system which is confronted by the world of performing art screaming that theatre & art is equally important & significant, if not more, in appeasing the Gods to shower rains than the yagnas which are the handiworks of orthodox Hindu civilization, a reality that is menacing even today.

The Play
This novel composition combines the features of ballet and puppet play. It presents a folkloristic version of the Ramayana in the manner of a Rajasthani puppet play. The movements of the actors are stylized; all dancers wear square masks on which faces, crowns and headgears are modeled and painted. They create the illusion of wooden, head-heavy puppets, but through skillful execution give afantastic animation to the faces. Critics have called this a stroke of genius. The first performance of this play was at the Jai Hind College Hall, Bombay, on the 6th of January, 1953.

The theme of Ramayana is aptly introduced in the context of a village fair, with peasants and village-women, milling around in the excitement of the market. The performance begins with Ayodhya celebrating the return of Rama and Lakshmana after Rama’s wedding and culminates in the celebration of the victory of Rama over Ravana.

Glimpse of the play Ramayana

Director
Shanti  Bardhan (1915-1954) will always be remembered in the history of Indian ballet, as a creative artist who, through his choreographic compositions, gave new direction to the evolution of dance in India. A gifted dancer, specially trained in the Manipuri and Tipperah schools of dance to which he devoted twelve years of study and practice, Shanti Bardhan was thoroughly acquainted with several other classical and folk dance forms.

He created ballets on many themes, utilizing his vast knowledge and varied training. His ballet Bhookha Hai Bangal created a profound stir. India’s Struggle for Independence led to the creation of Spirit of India, India Immortal and The Discovery of India, of which the last drew inspiration from Jawaharlal Nehru’s book of the same title. In 1952 The Little Ballet Troupe came into being. His mature vision made him choreograph scenes from the Ramayana and the Panchtantra. The themes were traditional and a part of an age-old cultural heritage. With an unerring insight of a genius, Shanti Bardhan shed the religious superstructure of the Ramayana story and transformed it into a simple human story of universal significance. In his treatment of the Panchtantra, fables in which birds and beasts live human situations, the stage again presented that piquant blend of realism and phantasy, which is perhaps the real source of the power of ballet as an art form.

His untimely death was a tragic loss to the contemporary movement in Indian dance. But his work lives on and is a great source of joyto all.

The Play
Upon her arrival in Thebes, Antigone learns that both her brothers are dead. Eteocles has been given a proper burial, but Creon, Antigone’s uncle who has inherited the throne, has issued a royal edict banning the burial of Polynices, who he believes was a traitor. Antigone defies the law, buries her brother, and is caught. When Creon locks her away in prison, she kills herself. Meanwhile, not realizing Antigone has taken her own life, the blind prophet Teiresias, Creon’s son, and Antigone’s fiancé Haemon, and the Chorus plead with Creon to release her. Creon finally relents, but finds her dead in her jail cell. Out of despair, Haemon and Creon’s wife kill themselves, and Creon is left in distress and sorrow. 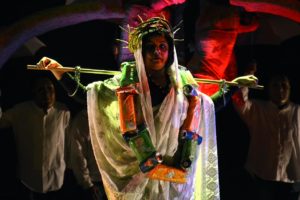 Glimpse of the play Antigone

While working with Antigone I have wondered a million times why a thousand-year old play still holds relevance. Is it because of its literary excellence or is it because of the writer’s wisdom to foresee the times to come… the wisdom which saw that hatred will never cease to exist even when decades and centuries go by and man’s hunger for power will bring darkness even before sunset… and will be darker than any night.