“In theatre, we create metaphors out of life.” 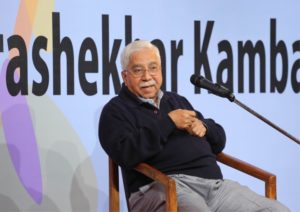 Sharing his journey in the field of theatre, Dr. Kambar said, “India lost its artistic nature during the independence struggle and political disturbance.” Mr. Kambar holds knowledge of the modern theatre in Indian context. Explaining the value of modern theatre, he said, “We have 13 Shakespeare in our regional translations.”

Expressing his thoughts upon folk theatre, Mr. Kambar mentioned, “Folk theatre needs audience participation, not only actors. Folk theatre is not as sophisticated as modern theatre but the actors emerges from the audiences themselves.”When theatre and literature were discussed in the session, Mr.Kambar explained the importance of theatre in its practical context and literature added, “When literature and theatre combines in a perfect harmony, we have drama.” Emphasising upon the value of art, Mr Kambar said, “We create metaphors out of our lives in theatre.” Mr Kambar also recited his creations of prayer songs at audience demand.

For “Meet the Director”,Antarmukh hosted the directors of yesterday’s productions: Protarak (Sandip Bhattacharya), The Wild (Thom Pasculli) and Tar Aaya (Pandu Ranga). The directors interacted with the audience about the aspects of play. Explaining the production’s behaviour, Thom Pasculli, director of “The Wild”, said, “Mine is a laboratory production. It has a nature of wilderness in it. Even the rehearsal room allows the chaos to be present.”

NSD’s diploma production of “Tar Aaya” Pandu Ranga said, “Dalit literature has always been neglected. Through the adaptation of a story written by a Dalit author, I wanted to highlight its important.”