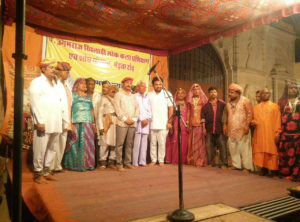 The Form
Khayal is an all-night recital of the historic and Pauranic love-stories sung and enacted in the villages. Kuchamani Khayal is the most popular form of Rajasthani folk art. Late Lachhi Ram Ji of Kuchaman was the father of this form, and had a strong voice. Around a hundred years ago he created this form for the village Kuchaman and thus it came to be known popularly as Kuchamani. Initially the performance was accompanied by Dholak, Nagara, Turri etc. but over the years Harmonium, Tabla Sitar and Sarangi also got incorporated. The costumes of the artists are often symbolic. For example, the king doesn’t wear expensive clothes but puts on a crown or a kalangi over his regular clothes. By wearing a lehnga, kurti and kaanchali, and drawing a goonghat a man represents a woman. Pt. Ugamraj ji has contributed immensely in this folk form for the past 65 years, staging the message of patriotism, bravery and truth, in every nook and corner of the country. He has created a world record by staging more than 20000 performances of Kuchamani form of Khayal from Kashmir to Kanyakumari.

The Play
Mahapurush Goga ji is popular as a secular god of the middle ages who was above caste, creed, Hindu, Muslim and Sikh. Goga ji of Rajasthan, as per a famous story, was born as a blessing given by Guru Gorakhnath. His mother could not bear children and went to meet Guru Gorakhnath who was then meditating on a hillock. He gave her a boon that she will bear a son and gave her a fruit called Gogal as a blessing. On eating the fruit she conceived and later Goga ji was born. He was called Goga ji after the fruit Gogal. Qayamkhani Muslim society calls him Jahar Pir. He became a disciple of Guru Gorakhnath. To commemorate Goga ji, in the month of Bhadra, a fair is organised and is visited by all communities including Hindus and Muslims. This production is based on the life and works of the aforesaid Goga Chauhan.

The Director
Born in 1958 in village Medhta, District Nagaur of Rajasthan, Dr. Siddique Mohammad is currently the chairman of Ugamraj Khiladi Lok Kala Prashikshan Evam Shodh Sansthan. After completing B.A. (Hons), M.A. and Ph.D., and gaining popularity in the universities, he served as an associate professor. He has been an avid translator, publisher and researcher. During his research he was given a grant by the Department of Hindi by Jai Narayan Vyas University, Jodhpur; and Ambedkar Fellowship by Bhartiya Dalit Sahitya Akademi, Delhi. He has also received many awards and honours.