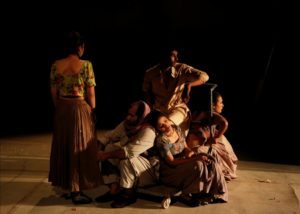 When Bhuvneshwar Prasad’s story ‘Bhediye’ was first published it created quite a stir in literary circles of 1933 India. The story begins by asking what is a bhediya? (a wolf).  Kharu says there’s none other as dangerous as them, appearing in packs, nothing satiates their hunger. Kharu recites a story in which he, his father and three Nataniyas were traversing from Gwalior to Punjab when they were attacked by a hungry pack of bhediyas. Chasing and compelling him to abandon all his belongings/possessions behind. Running to save his life he loses his father. It story ends after Kharu spits and tells that the very next year he killed a pack of sixty bhediye!

Bhediye is a narrative of a progressing violent swarm, being run over by it, and losing all one has to it. A new light of meaning emanates from this story every single time I read it. Its approach to language, structure and characterizations are cold and brutal. Like a hammer thumping onto a nail penetrating your bleeding soul. It has an odor of fear and terror – a topical subject to reflect upon as our country’s crisis.  An evolving society, whose minorities – are people who belong nowhere – are chased, lynched.

Survivors though saved but scarred for life holding anger, betrayal, loss, revenge and guilt within. Feelings, which compel him to attack the swarm that swept everything he called mine. Attacker and attacked let loose a trail of disaster and stories of inhumane horror.

It was quite challenging for us as a team to create performance out of this text because of its narrative nature. To cull out its visual elements, through the physicality and material expression it offers. We are thankful to all friends who kept visiting us during rehearsals and contributed to make the work what it is.

Avijit Solanki is a Bhopali who debuted as a director with an adaptation of Tagore’s Daakghar in Gondi dialect. After completing his diploma from Madhya Pradesh School of Drama (2012), he founded Other Theatre. Some of his directorial ventures are- Daakghar, Antigone, Bade Bade Pankhon Wala Boodha, Kucch Vakya, Jaadui Macchi, Ismat ki Id. He has worked with children from different backgrounds and communities.

Bhubaneswar (1911 – 1957) born to a middle-class family in Shahjahanpur (U.P.). His periodic compositions exposed the boundaries drawn between the ideal and real so that they started spearheading beliefs, traditions and a new voice.

Bhubaneswar was an outspoken and distinct literary voice, which was hitherto unknown and unspoken then. He exposed classic irregularities in the form of bitter truths through his writings. His contribution to literature and language was an enrichment brought to life with his courage to experiment with new technical compositions. Some of his path-breaking works were published in Hans, ‘Shyama: A Marital Paradox’, 1933 and a collection of one-act plays in ‘Caravan’, 1935, established him as a monolith in literature. The play Tambe Ke Keede, he wrote in 1946, found its honour of place as first incompatible and incomprehensible absurd drama written in any language of the world.

This is a diploma play presented as a part of National School of Drama’s graduate showcase (class of 2018), which aims to provide a platform, for emerging theatre practitioners, allowing them to share their work with wider audience.