A Matter of Applause / Keval Arora 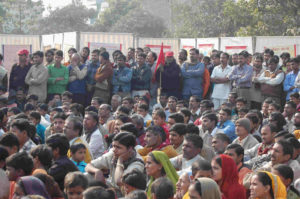 Suspense! – Will They or Won’t They?

A critical difference between live and recorded performances (those in cinema or television) can be seen in the way we respond to them. Namely, in the matter of applause. When it comes to other kinds of reaction – laughing, being moved, being irritated, etc – it seems to not matter whether the performer stands before us in the flesh or as a projected image or digitised signal. (Well, some of us may fight our tears and laughter in the public space of the cinema hall, while comfortably letting go within the privacy of television viewing. But, that difference is a only a matter of public rectitude; and, in any case, it makes no distinction between live and recorded performance.) Applause, on the other hand, is a category of response that is found almost exclusively within live performance.

When a show is over, you clap. Duration, intensity and manner (seated or standing ovation) provide some variation; with whistling being reserved for in-house audiences of friends and colleagues. The end result is pretty much always the same: as the house lights go up, you clap. The applause may well be tepid and mechanical; it may even be somewhat forced when performances are of indifferent quality, but you still clap. On the other hand, we rarely do that for films or television programmes — even when we have been deeply moved. The reason for this strange gap between our private response and our public gesture is obvious. Applauding a recorded performance is pointless because there’s no one there to receive the appreciation, whereas live performances exert a kind of pressure on spectators when artistes return to the stage for a curtain call. Similarly, it’s only at those screenings where someone connected with the film is present that applause is sometimes heard. Or, and this has been happening of late, when the film comes with a reputation for being ‘controversial’ or even ‘alternative’ – the applause that is then offered is usually a gesture of solidarity intended for others in the audience.

It’s obvious then that applause, as compared to reactions such as laughter and tears, is not so much a private response as it is a social gesture, a protocol of communication with those around you. At the risk of schematising the division, one can perhaps argue that laughter and tears express us as individuals or as a group, and to that extent possess the authenticity of a self-authored monologue; whereas, applause, to extend the metaphor, has more the contextual push and pull of dialogue. The fact that, barring the case of a few theatrical modes, performers and their fictions tend to carry on regardless of what spectators vocalise during the performance, indicates the unidirectional nature of spectator response. Addressed to no one in particular and in no expectation of any kind of counter-response, ‘laughter and tears’ (I’m sorry, but you’ll have to lump the phrase as a shorthand for some time) can be seen as self-articulations of the purest kind. Applause, on the other hand, occurs outside rather than within the performance, when the actor has shed his character’s clothes and comes before us as s/he is. That maybe a reason why, when viewing a performance with strangers, we hold back from what we perceive as ‘excessive’ private response and yet do not feel similarly vulnerable when we willingly demonstrate personal appreciation in the form of applause.

Applause is a socialised response in another sense as well. For, this is what you’re obliged to do for these actors who have striven to give you, if one may invert that venerable line in Waiting for Godot, ‘such a fine, fine time’. Isn’t that why many of us clap automatically at the end of a performance, even when we haven’t particularly enjoyed it? It’s what is expected of you, it’s your part of the bargain, and to not offer it at the end of a performance seems churlish. After all, ‘putting up a play is no joke, ‘we must applaud the effort and intention if not the achievement’, ‘it’s the least we can do to encourage the few who keep the flag flying’ and all that, are no doubt powerful arguments that only the culturally insensate can ignore. Such is the momentum of this socialised action that it actually takes willed premeditation on one’s part to refuse even token applause.

Though much of what I’ve been saying relates mainly to the applause that greets performances at their end, it is possible to find a similar geniality at work at other moments as well. Especially in this terrible habit of spectators clapping in the middle of a performance. Applauding during a performance is certainly not as distracting in the theatre as it is in the case of a Western classical music – remember the bemused horror that Delhi audiences had evoked during the Zubin Mehta concert several years ago? – but it is violative nevertheless. And dangerous too, for, before you know it, such interruptive appreciation becomes the norm, for performers and spectators alike. I’ve heard it said so often that Western classical music performances brook no interruption, even appreciative ones, that the implication these are acceptable within Hindustani and Carnatic music traditions has become something of a truism. However, it is equally intrusive in the latter case, especially when mid-performance applause comes to be regarded as more ‘authentic’ (it’s ‘spontaneous’, you see) than its automatic, polite cousin that shows up at the end. For, then, performers are persuaded to play to the gallery, to chop their own creation into a series of effects, and to lose a sense of the whole.

One of the problems with applause – arguably the most insidious one, for this is seen equally in its ‘authentic’ and its ‘polite’ manifestations – relates to this problem of ‘losing a sense of the whole’. What is it that we appreciate, and I’m now speaking of the theatre, when we offer applause to a performance? The text, the play, the analysis, the experience? Perhaps, sometimes; but only rarely so. More often than not, we offer applause to the performers rather than the performance, the skills on display and the effort that went into the making of the show. On the face of it, this appears consistent with the socialised aspect of applause I’ve mentioned earlier, but it is more than that. For, it is equally true of the cinema. There too we respond primarily to the actors’ performances, and only secondarily to the argument the film may be offering (unless, of course, we are students of the cinema — in which case, it is the camera-work that sets our hearts pounding!). This aspect of applause is violative in fundamental ways because it compromises the integrity and cohesion of the work itself. Applause of this kind signals the constant deflection through which performances are received, through which texts are constantly reduced into an assembly of enactments, and plays into their playing.

It is difficult for most plays to survive the corrosive influence of such appreciation. Especially such plays which are not celebratory or light in tone. If they do survive, it is because of the raw power of their texts, which not even the most enthusiastic appreciation can completely swamp. I remember one such play and one such audience when Women Can’t Wait, a solo show by the US actress Sarah Jones, was staged in the open at the IHC amphitheatre. Women Can’t Wait was originally commissioned by Equality Now! for performance before government delegates to the UN Global Conference on Women’s Rights held in New York. It toured Indiacourtesy Crea and Tarshi, NGOs working in the area of women’s rights.

The play comprised a series of narrations by different women, addressed to an imagined assembly of government officials, as a reminder to governments and the people manning them that “they have promises to keep”. The women, eight in all (from India, Japan, Uruguay, France, USA, Jordan, Israel and Nigeria) spoke of brutalising aspects of their lives, made doubly intolerable by the fact of their countries’ laws providing no recourse. The fiction within which these monologues were couched was that of a rehearsal: the women were rehearsing their speeches for presentation before delegates, and in so doing, the actress presented them directly to the audience. One of the women played the role of coach and moderator, offering tips on presentation (“Speak with conviction because your audience is generally unsympathetic”; and “Smile at them. The UN people like that”), monitoring vocabulary and tone (“No, dear, I don’t think you can use that word”), and generally boosting the morale of the nervous speakers.

These monologues had interesting layers worked into them, but I won’t speak of that now because this is not intended as a review of the play. In fact, what I’m driving at is that Women Can’t Wait is perhaps not even a play. Certainly, to equate it with what goes on regularly in the name of evening entertainments does it grave injustice. Women Can’t Wait is more than a play: it is an intervention in civil space, and therefore ‘culture’ in the best sense of the word.

Author-director-actress Sarah Jones played all the women, using nothing but phenomenal shifts in voice, accent and rhythm to mesmerise us with the sensation of there being actually eight different women on stage before us. Oh yes, much has been made of a scarf that she used in different ways to contribute some visual variety, but I’m sure that had there been no scarf, it would have taken little away from the convincing textures of her performance.

Jones’ skill at bringing to life eight different speech, gestural, social, professional and economic profiles, and binding all of them into a common articulation of indignation and protest, was clearly a major strength of Women Can’t Wait. Yet, it was also a profound handicap. Jones had the audience so eating out of her hand that, in the course of the performance, it became unclear what the spectators were looking at. Take the instance of the honour killing that Hala of Jordan narrated. Her story was raw and bloody, and the silence in that packed amphitheatre deepened with horror at the calm brutality of familial honour. Yet, as the character’s voice trailed away, unable to complete her story, there was only the briefest of pauses before applause broke out and swelled — for what? The juxtaposition of the two moments – the character’s yielding to silence and the spectators’ applause – was obscene. (In hard, perhaps pedantic, terms, it was even undesirable.) But that is what Jones’ ability to present yet another character movingly and “with conviction” achieved. Hala’s story was picked clean of its emotional gore (mind you, these monologues were constructed from documented, real-life instances), and sanitised through our appreciation of a marvellous actress’ command over voice and speech.

Instances of this kind make me sometimes wonder why so much time is spent in discussing the success/failure of performances even as we ignore the equally vital question of the success and the failure of audiences.