The Most Magnificent Palace in the East: The Red Fort of Shah Jahan, the King of the World / Anisha Shekhar Mukherji

Part III of the lecture delivered at the ATTIC, New Delhi 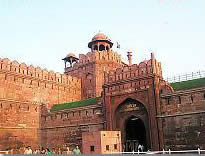 In contrast, the living and working areas of the craftspeople and attendants were located beyond the high entrance streets off the Main Gates in the shadow of Fort.s towering outer walls adjacent to the city. They were densely built around twisting streets, resembling parts of the city outside the walls of the Fort, yet positioned in such a way that they were shielded from the view of state visitors and even of the Emperor who, despite being the lord of the entire Fort, as indeed of the entire empire, never needed to go into these parts of the Fort which could thus develop freely. These drawings show the areas of movement of different categories of people within the Fort-the Emperor, a nobleman, a Mughal queen, and an ordinary inhabitant of the city. The Fort was thus a microcosm of the Mughal way of life. not merely the Imperial Mughal way of life.

7. Each sub-area within the Fort had its own courtyards bounded by gateways and continuous arcades that not only provided shaded areas to work, sit or walk in, but also privacy from the other spaces around them. The open courtyards and gardens also had the advantage of flexiblity; if there were more crowds such as on the Fort’s inauguration ceremonies or at Shah Jahan’s birthday celebrations or during festivals, by spreading canopies and qanats, more covered area could be easily and quickly obtained. Thus, open space was fashioned and designed such that it was used as an extension of built space. and built space shaded or enclosed open space so that it could be used effectively in all seasons. It was also because of these open areas sited in between built areas, that many of Shah Jahan.s original pavilions could stay virtually unobstructed and untouched, despite a greatly increasing population in the Fort during the times of his descendants. It was around the boundaries of some of the main courts and gardens or within many of the less visible ones that the later Mughal rulers and their sons and daughters got more structures built. The built spaces too, whether the grand entrance forecourts and gateways, or the Emperor.s own pavilions were multifunctional in use. Thus, the Lahori and Delhi gateways contained living quarters for soldiers, the Naqqar Khana Gateway not only provided a regulated entrance but also contained chambers for musicians. The Emperor.s Hall of Private Audience from wheer he dispensed justice also doubled up as a reception on the occasion of private celebrations. All these buildings that the Emperor stayed or worked in were not enclosed buildings but pavilions, a series of verandahs, which could be hung with carpets and covered with qanats, or left open to let the river-breezes in.

First, that despite being the favoured  residence and the prized patronage of the  richest ruler in the medieval world, the  Red Fort was planned and detailed to  be socially inclusive.It was designed  not just as a residence of a monarch but  as a miniature city with all the positive  opportunities for economic, social and  cultural interaction that a city affords.  Everyone, even the poorest of the  inhabitants was a stake-holder in the Fort.  Visually, and spatially too there was no  bar between the direct axis linking Shah  Jahan to his people.instead of the  ramparts and barbicans that block the  Fort from the city today, originally a  bridge lead straight from the Chandni  Chowk to the Lahori Gate, and further to  the Emperor’s Throne of Justice in the Diwan-i-Am

Secondly, the Fort’s design was ecologically and environmentally  considerate.there was no unnecessary  wastage of resources-instead of the  stretches of high-maintenance lawns that  pass for gardens today, the Fort.s vast  gardens were essentially orchards; they  worked as productive areas as well as  places of pleasure, entertainment and    repose; they moderated the micro-climate and  used only the optimum amount of precious  water. Even the water in the fountains used  to cool and decorate the Fort.s pavilions and  its gardens, or in the imperial bathing  chambers was recycled.either for irrigation,  or for watering animals, or for cooling the  public parts of the Fort. The palaces of the  Emperor and his family as well as their grand  entrance sequences which were a succession  of forecourts and gateways were all  multifunctional in use.they could equally be  used for people to gather, for administrative  work, for court ceremonial, as well as  circulation spaces.

Thirdly, the Fort’s design was an example of further development of the traditional  indigenous courtyard typology; where not  only were the proportions of the built and  open spaces of the highest order but where  utilization of space was maximized despite  constructing a minimum number of built  structures.

And finally, the Fort’s design displayed  those qualities which make design truly  great, where no element is superfluous or  extraneous. None of its structures and  spaces was designed as simply utilitarian  or purely decorative. Each component of its  design.whether the form or detail of its  gardens, pavilions, forecourts, gateways or  colonnades was both useful and beautiful; the  form, structure and decoration in them could  not be separated from each other.  These are some of the original  attributes of the Red Fort, beyond just its  immediate form, that need to be recognized  and conserved. Conserved not just as empty  shells but as an act of celebration that restores  the same qualities of inclusiveness, of concern  for people, for the environment and for  material and human resources that Shah Jahan  and his builders did. While the different layers  of history which have left their mark on the  Fort, make it a site of great historical interest,  its principal value in terms of world and Indian  heritage continues to stem from the cultural,  architectural, associational and artistic value of  its original design. It is thus imperative to  ensure that the potency of its original design is  physically conserved and communicated. In  fact, the Fort.s ingenious planning and    detailing have important lessons for not just  for architectural and art historians, but also  for contemporary designers and their clients,  as well as for anybody who lives in this part of  the world.  Till this appreciation is confined to a  few academics, there will never be any  sustained support for the Red Fort, which  above all, was a celebration of life.in its  establishment, in the ceremonies that marked  the Emperor.s sojourn in it, in the artists,  painters, poets and singers that it patronized,  in its gardens and in its trees that made life  beautiful and pleasant even in the sweltering  summers of Delhi. We need to reinstate all  these aspects of the Red Fort.s past and its  status as a cultural, architectural and artistic  icon.  What we need is a new method of  conservation that involves people by  presenting to them all the information that  has so far been the domain of the scholar or  the bureaucrat; that is planned and  implemented in a manner that includes  instead of disregarding the citizens of this  country.whether as professionals, as visitors,  as artists, as inhabitants, as students. We are.  or should be.equally the stake-holders as  well as the guardians of our history. Perhaps  then we may be able to fulfill at least a part of  the wish of the makers of the Red Fort,  inscribed in good faith on the walls of the  Khwabgah or the House of Dreams.Shah  Jahan.s own sleeping chambers in the Fort.

May the Emperor of the world, Shah Jahan by his good fortune,

The second lord of felicity

In the royal palace with great magnificence,

As long as foundation is indispensable with the building,

May the palace of his good fortune touch the highest heaven.

a native artist (From the Dehli Book commissioned

Courtesy: The Oriental and India Office

Extant structures highlighted in a detail

of the Map drawn by an Indian artist in the mid-

Showing proportion and profile of built and open

structures before and after the destruction by the

century, (From the Dehli Book commissioned by Sir Thomas Metcalfe)

(From the Dehli Book commissioned by Sir Thomas Metcalfe)