SATYA KE PRAYOG (BASED ON THE AUTOBIOGRAPHY OF GANDHIJI) Director: Devendra Raj Ankur 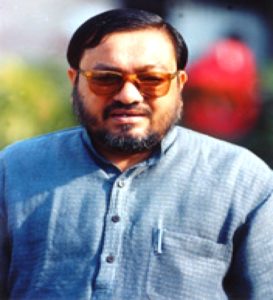 Director’s Note
On the occasion of the 150th anniversary of Mahatma Gandhi we decided to prepare a play that had him in the centre. A number of different texts related to Gandhi were read. In the end it was decided to prepare a play on his own story, Satya ke Prayog. Many incidents related to his life have often been staged earlier. Our effort has been to select the sections that are less familiar or untouched. We have tried to stage the translation as it is. Yes, there has been an effort to give it a chronological sequence. The play is around one and a half hour in duration. We have tried to catch different aspects of Gandhi’s life from childhood till the end.

The Director
Devendra Raj Ankur did M.A. in Hindi Literature from Delhi University, and specialised in Direction from National School of Drama. He has directed many professional and amateur theatre groups all around the country. He is a founder member of the popular theatre group Sambhav, and the initiator of ‘Kahani ka Rangmanch’. He has participated as a director in theatre workshops and his plays have been staged in numerous cities. He has translated many plays from English and other languages, and is a regular columnist of theatre in many magazines and journals. More than seven of his books on theatre criticism have been published. He has been the director of National School of Drama. He was awarded with the Sangeet Natya Akademi award for special contribution in the field of theatre.