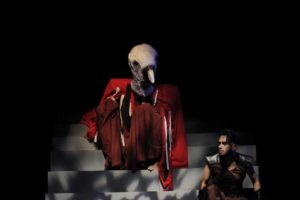 The Play
Birds from all over the world gather together for a great conference. The nation of birds is in crisis, and urged by one of their flock, the Hoopoe, they have to chart a path to find their king Simurgh. For this they need to travel a long way towards the mountain called Kaf. During this journey, some die, some drop out, while others continue their quest of discovery, love, understanding, disappointment, destruction, unity and death. At last the survivors come into the presence of the great one, and discover that they themselves are the embodiment of the divine.

Director’s Note
Seven years ago, I came across Conference of the Birds while attending a physical theatre workshop jointly organized by Actors’ Studio and Embassy of US in Nepal. Description of the seven valleys seemed mythical and ancient on one hand and new and ultra-modern on the other. It was the perspective and relevancy that enabled me to stage the ancient masterpiece in today’s context. Through physical gestures and dialogues, each actor has tried to convey different unexplored meanings of the text. I have left a few things as mystery.

The Director
Deeya Maskey is a renowned actor, dancer and TV personality in Nepal. She initially trained as a professional Indian classical dancer from Allahabad, India and later completed her training in acting at Actors’ Studio, Nepal. Since then she has been practicing contemporary dances to explore a unique style by using the body, spatial relationship, kinesthetic responses and voice. Some of the famous films that she has acted in are Kagbeni, Soongava, and Fitkiri. She has worked as a choreographer for several theatre and film productions. She is also a judge in the Nepali edition of MTV Roadies show, Himalayan Roadies.

The Playwrights
Peter Brook contributed significantly to the development of 20th century’s avant-garde stage. He established the International Centre of Theatre Research in 1970 in Paris. He has won multiple Tony and Emmy Awards, a Laurence Olivier Award, the Praemium Imperiale, and the Prix Italia. He has been called ‘The greatest living theatre director’.

Jean-Claude Carrière is a renowned French novelist, story-writer and actor. He is known for his works as writer and actor in Luis Buñuel’s films Unbearable Lightness of Being, The Discreet Charm of the Bourgeoisie, and Birth. He has received Best Live Action Short Film Award (1963) as well as Academy Honorary Award (2014) for lifetime achievement. He has also been honoured with the Padma Shree, award in India.

The Group
The Actors’ Studio has been performing in Nepal and abroad for more than one and a half decade. It has carved a niche in Nepali theatre by staging artistic yet committed and socially relevant plays, and establishing the presence of Nepali theatre in the international arena by producing radical and experimental works.