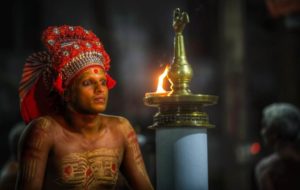 The Form
Theyyam is a socio-religious ritual in the north Malabar region of the Kerala state in India. The mythological, divine, ancestral, animal, serpent or heroic characters are represented in it, each with its distinct physical shape, and a story of its origin. It is a subaltern performing art as the performers of Theyyam belong to the lower caste community, and have an important position in Theyyam. People of north Malabar consider Theyyam itself as a God and seek his blessings.

The Play
Kathivannur Veeran has earned an indomitable place in the memory of the local folk, both as an accomplished warrior and an excellent lover. Mandappan was the son of Chakki of Parakkayillam and Kumarachan of Meathali Illam, in Kannur district, born with the blessings of Chuzhali Bhagavathi. While enjoying life as a carefree youth, he happened to quarrel with his father once. In rage, Kumarachan stamped on Mandappan’s bow, and broke it into two. Upset with his father, and convinced that a warrior who was bereft of his weapon was as good as dead, the boy left his house with his friends, to join his uncle. On the way, he was cheated by his friends. Finally, he reached his uncle’s house in Kudagu where he settled down to a life of farming and trading. He happened to see the beautiful Chemmaruthi of Velaarkotta Veettil and married her. The young couple was so much in love that their ardour and possessiveness often led to quarrels. One day, she picked up an argument with him because he had returned late. He was not able to convince her that he got delayed trying to sell sesame oil. As soon as he sat down to eat, he heard the sound of the war bugles announcing the beginning of the war between Muthaarmudi Kudagar and Malayaalees. Mandappan got up and rushed to the battle field, not heeding Chemmmaruthi’s words and curses. During the battle he lost his little finger and the ceremonial ring. He got worried that his wife would pick up an argument about his lost ring. So, he returned to the battlefield, and the Kudagars ambushed and shot him to death. Mandappan’s grieving friends, gathered the strewn pieces of Mandappan’s body and took them to Velaarkotta Veedu, and got the pyre ready to cremate the remains. The grief stricken Chemmaruthi, who divined her husband’s death beforehand, ended her life, jumping into her husband’s burning pyre. The efforts of her brothers proved of no use as she distracted them before immolating herself. It is this hero and his love who are celebrated through Kathivannur Theyyam performance. It is said that the Chemmaruthi Thara, built in the name of Chemmaruthi, famed for her excessive love, is symbolic of Kathivannur Veeran’s enduring affection for his beloved wife. The panthams (lighted torches or flames) on her Thara, are said to commemorate Kathivannur Veeran’s loyal friends, and evoke the atmosphere of the battlefield. Mandappan and Chemmaruthi continue to live in the hearts of the people as the unforgettable lovers of Thayyattam stories. Lengthy thottams, sword fights, acrobatics, martial moves and Urumi fights keep the spectators spell bound during Kathivannur Veeran Theyyam performance. Its ritual practices last for three days. Hence, as far as the viewer is concerned, Kathivannur Veeeran is not an easy Theyyam to enjoy.