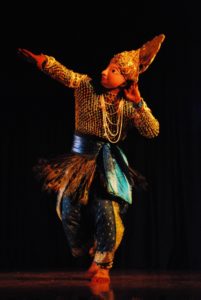 Seraikella Chhau – Based on martial arts, the Seraikella Chhau follows the tenets of Natya Shastra as propounded in our scriptures. The use of masks is its uniqueness and the dancer uses these to clarify and depict the theme of the dance. The dancer expresses different emotions, notions and ideas with the drum beats (Tal) and musical rhythms. The dance runs in three phases i.e. Sthayee (Permanent posture), Madhyala (Intermediate movements), and Drut (Faster movements). Various topics from Ramayana and Mahabharata, abstract ideas, and common social incidents form the subject matter of these dances.

Mayurbhanj Chhau – Mayurbhanj Chhau dance form has a long history. Originally a tribal dance, which originated from the forests of Mayurbhanj, Odisha, in the 18th century, it got the status of a martial art form in the 19th century.

Slowly & steadily Mayurbhanj Chhau left its martial character and got mellowed. Under the royal patronage it received proper attention & direction and showed a bright future and utmost perfection as a dance of excellent style in the field of eastern art and culture of India. Mayurbhanj Chhau is performed without masks and is technically similar to the Seraikella Chhau.

Jatraghat – It is a musical offering that evokes the gods and marks the beginning of a Seraikella Chhau & Mayurbhanj Chhau dance performance.

In this particular dance composition Krishna’s mellifluous flute forms an intrinsic part of the love imagery.

This depicts the beauty of the stately swan as it swims in its natural habitat of water.

This episode is taken from the Upanayana ceremony of a Brahmin boy.

The peacock is a bird known for its grandeur and beauty. This bird of extraordinary beauty- its feelings of joy and vanity, and the qualities of grace in its movements are given an anthropomorphic representation.

The dance depicts an episode from the Mahabharata, the epic based on the concept of Shrimad Bhagavad Geeta’s Sainya Darshana Yoga.

Representing the fifth generation in a family of traditional performers who have significantly contributed in the evolution and development of Chhau dance, Sapan Kumar Acharya is steeped in the tradition of Seraikella Chhau. He has inherited the knowledge of this art form from his father Guru Lingaraj Acharya. He has been awarded with Junior and Senior Fellowships from Ministry of Culture, Government of India. He is a visiting faculty of Chhau at Attakalari Movements of Arts, Bangalore, an Artistic Director of Acharya Chhau Nrutya Bichitra, Seraikella, and a Teacher at Triveni Kala Sangam, New Delhi. He has been training students of both dance and theatre for the past 15 years.

Acharya Chhau Nrutya Bichitra was founded by Late Guru Lingaraj Acharya in the year 1980. Since then the institution has been training several artists in Seraikella Chhau dance. Guru L.R. Acharya was one of the last gurus of the Purthosahi Akhada, one of the eight Akhadas of Seraikella Chhau dance schools.
Apart from training dancers, the institution has participated in various national and International dance festivals in India as well as abroad like India International Mask Dance Festival, the first international festival and seminar on Dance and Martial Arts of Asia, Yuva Mahotsava, a festival of all styles of Chhau dance, and Chidambaram and Ikeri temples. It has also been selected as one the training centers by the Sangeet Natak Akademi under its project to support to Chhau dance.