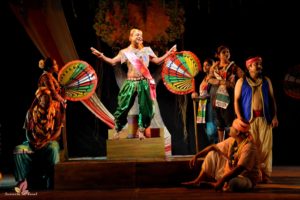 The Play
Arshinagar speaks about love and true emotions. In this era, where love has been commoditized, this story talks about the real definition of love and the magic it can create. Chaya Kumar, son of a rich merchant has to leave his wife on the next day of his marriage for business expansion.The newly wedded bride, Lilabati, lives with her in-laws, but feels a vacuum. But the power of love brings joy in Lilabati’s life and helps her overcome the void.

Director’s Note
Presented in a folk form, the flight of imagination in the play soars without any bondage of religion, cast or culture. To express the language of love and fathom its power, music is a vital character in this play. Various folk songs in the traditions of Jhumur, Bhadu, Tusu, Sari, Jari and Sufi are wonderfully tuned in the atmosphere through which the story runs smoothly. Various workshops and endless brainstorming sessions on choreography, costumes, light, set and editing resulted in this brilliant play.

The Playwright
Anil Saha was born in Bagbazar, Kolkata. He is a retired employee of State Bank of India. He joined a theatre workshop and is now a full-time theatre worker. He has acted in many plays and has been writing plays for 30 years.

The Group
Tala Dhrupad Natya Sanstha started its theatre journey in 2002. The group has produced Simantika written by the eminent dramatist Chandan Sen, Hastabud dramatized by Pradip Moulik and based on the story of Sahajad Firdous, The Numbers based on Nikolai Gogol’s story, Ranger Haat by Manoj Mitra, Bodli by Anil Saha, Bhan by Amiya Chattaraj, Uro Megh by Mohit Chattopadhyay, Punajjanma by Dwijendralal Roy and many more.