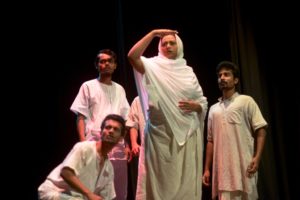 A dramatist wants to write a play on Baghajatin. He is trying to understand Baghajatin’s strategy to fight against 500 British soldiers with only four companions. Was Baghajatin right? The writer appeared to have had an interaction with the soul of Baghajatin who answers all his queries. He explains how Bhagawad Gita and other holy scriptures of our Indian philosophy had defined true leaders. The melodrama begins when the dramatist rewinds the sequences, imagining that the five great fighters have won the battle.

I believe it as my duty and responsibility to cover a few moments of truth related to a charismatic freedom fighter of India. India’s Freedom did not come all of a sudden. It was an outcome of great sacrifices of our freedom fighters who selflessly fought against the rulers. As a director, I started researching on the subject quite a while ago and discovered many unknown and interesting (sometimes unpleasant) happenings in the life of Baghajatin. I visited all the places where he had lived, worked and sacrificed his life for the country. The more I travelled, the more I was touched.  Knowing Baghajatin is a journey and that I have tried to capture in this play Nine Miles to Go.

Jayasree Bhattacharya did her M.Sc. in Archaeology from the University of Calcutta. She is a part-time lecturer at Maharaja Monindra Chandra College and Bagbazar Women College. Jayasree started her theatre journey in Kolkata at the age of three, with her paternal aunty and renowned actress, late Keya Chakraborty. She joined the National School of Drama (TIE), Sanakar Rang Toli as an artist-teacher in 1996. She conducted several theatre workshops under the extension programme of National School of Drama in North East and West Bengal. She is a founder member of Pragya Cultural Centre and works in the tribal areas using theatre-in-education as a tool. She is researching on theatre therapy for the differently-abled, and is presently doing theatre therapy and theatre workshops for differently-abled women and children. She assisted filmmakers Rituparno Ghosh and Buddhadeb Dasgupta. She has made 11 telefilms and one feature film and has won two international awards for her films Madur and Binisutormala.

Ujjwal Chattopadhyay is a professor of Economics and an eminent playwright of West Bengal who has been serving Bengali theatre for decades. Most of his plays have been produced by directors like Bibhas Chakraborty, Meghnad Bhattacharya, Bratya Basu, Soumitra Mitra, Kaushik Sen, Prokash Bhattacharya and others. Some of his remarkable plays are Akarik, Antaral, Bhrom, Antoni-Soudamini, Arabyorajani, Biley, Drohokal, Dhrubatar, Nati Kiranshasi etc. He has also adapted the works of Chekov, Tagore, Shakespeare and Kalidas.

Pragya Cultural Centre is a Kolkata based theatre group. It works for social causes, and for differently abled people using theatre as a therapy. The group has been performing a popular play Fight Cancer since 2003. It runs theatre workshops for theatre lovers in the eastern zone. It has won several drama competitions and awards.