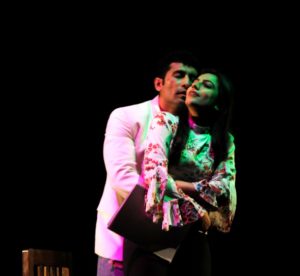 Prasad is a popular theatre actor, who considers himself to be the best and doesn’t value his co-actresses. His ego is quite visible during his conversation with his secretary Mohit. During the days of his struggle, Bhowmik, a fellow actor & friend, comes to meet him with an issue which leads to a heated argument between the two. Bhowmik challenges Prasad to work in the play titled Morphosis, since Prasad doesn’t have enough talent for the lead role of Manas. Prasad accepts the challenge and approaches Guruji, the director of the play. Guruji had once insulted Prasad and this time too he leaves no stone unturned to humiliate him, and yet chooses Prasad for the role of Manas. The process begins – tireless preparation for the character, journey of commitment, strict discipline, dedication, sacrifice, love and self-analysis…. and finally a ‘Morphosis’.

The play is based on the real story of an arrogant actor and a top ranking film director in Bollywood who appeared in the actor’s life as a blessing in disguise and turned him into a very successful, and one of the highest paid actors in the industry. It is a play about what an actor and acting is all about. The text of the play has been kept as it is.

The multifaceted Bapi Bose is a prominent and radical director, activist, ideologue and thinker of Contemporary Indian Theatre. Mr. Bose is a practitioner of New Media and Installation Art which he incorporates consistently in many of his productions. He teaches in many theatre institutes and theatre departments of various universities including the National School of Drama, New Delhi. At present he is working as a freelance designer, director, and teacher, and is the Founder & Artistic Director of Circle Theatre, a professional theatre company in Delhi. He has been awarded scholarships and fellowships, Netaji Samman (Gold Medal), Natsamrat Award, Patliputra Lifetime Achievement Award etc. Bapi Bose has been bestowed with the National Award, conferred by the Central Sangeet Natak Akademi, New Delhi.

Rhishikesh Vaidya’s first literary work was Krishna Nahi Ban Paunga, a collection of Hindi ghazals and poetry. During the preparations of civil services, he came across the works of Mohan Rakesh. These inspired him to become a playwright. He has written stage plays and Radio plays. Jawab Do Gandhi, Uske Baad, Khat-Khat-Khat, Kaun and Morphosis are some of his noted plays. He bagged the Mohan Rakesh Award by Sahitya Kala Parishad and a short film was produced on his play Ateet Aur Vartman based on Birsa Munda. His plays are broadcast by All India Radio, Indore.

Formed in 2002, under the leadership of Bapi Bose, Circle Theatre staged its first production in the 4th Bharat Rang Mahotsav (the International Theatre Festival of NSD). All its productions have excelled in terms of artistic quality, expression and social message. It has been awarded by the Sahitya Kala Parishad and the Govt. of NCT Delhi; and has participated in Bharat Rang Mahotsav and its Satellite Theatre Festival in Kolkata, and also in the 8th Theatre Olympics held in India. Circle Theatre has a library of over a thousand books and journals on theatre, and has been regularly engaged in organizing training programs and other theatre activities.