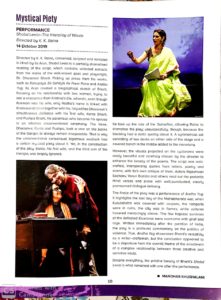 Text of The Review by Manohar Khushalani Published in IIC Diary

Directed by K K Raina, conceived, scripted and narrated in Hindi by Ila Arun, ‘Shabd Leela’ is a partially dramatized reading of the script, which contains selected extracts from the works of the well-known poet and playwright Dr. Dharamvir Bharti. Picking up prose from his works, such as, ‘Kanupriya’,‘Ek Sahityik Ke Prem Patra’ and ‘Andha Yug’,  Ila Arun created a biographical sketch of Bharti, focusing on his relationship with two women. Trying to see a resonance from Krishna’s life, wherein, even though Rukmani was his wife, yet, only Radha’s name is linked with Krishna and taken together with his. Ila justifies Dharamvir’s simultaneous dalliance with his first wife, Kanta Bharti and Pushpa Bharti, his paramour, who became his spouse in an informal unconventional ceremony. The three, Dharamvir Kanta and Pushpa, took a vow on the banks of Ganges, that they will always be inseparable.  That is why the unconventional consensual bigamous wedlock had a certain mystical piety about it. Yet, in the construction of the play, Kanta, his first wife, and the third arm of the triangle, was largely ignored.

Ila took up the role of the ‘Sutradhar’, allowing Raina to dramatize the play, unsuccessfully though, because the blocking had a static quality about it. A symmetrical set consisting of two desks on either side of the stage and a covered bench in the middle added to the monotony.

However, the visuals projected on the cyclorama were really beautiful and carefully chosen by the Director to enhance the beauty of the poems. The script was well crafted, interspersing quotes from the letters, poetry and drama, with Ila’s own critique about them. Actors Rajeswari Sachdev, Varun Badola and all the others read out the pedantic Hindi verses and prose with well punctuated, clearly pronounced dialogue delivery.

The finale of the play was a performance of Andhayug. It highlights the last day of the Mahabharata war, when Kurukshetra was covered with corpses, the ramparts were in ruins, the city was in flames, while vultures hovered menacingly above. The few hapless survivors of the defeated Kauravas were overcome with grief and rage.  Written immediately after the partition of the India, the play is a profound commentary on the politics of violence. True, Andhayug showcases Bharti’s versatility as a writer craftsman, but, the conclusion appeared to be a departure from the overall theme of the enactment of a complex relationship between three creative and sensitive souls.

Despite everything, the pristine beauty of Bharti’s Shabd Leela is what remains with you after the performance

Let the whole world know that Radha;
was not merely a note in your Song-
Radha was The Melody, The Music;
I have come to you my Dearest!
You who weaved fiery blossoms into my tresses!
Tarry not anymore;
To weave meaning into History!