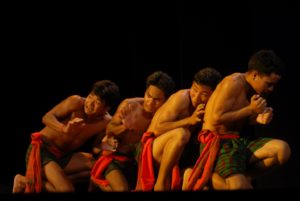 The Play
To’ Poidam is based on a Rabha folk-tale, and the literal meaning of the term is ‘the bird named Poidam’. The story revolves around a mother and her five sons. One day while collecting vegetables from her kitchen-garden the mother notices the droppings of an unknown bird. When the vegetable is cooked it turns out to be extremely delicious. After hearing about the indications of the presence of a strange bird, the four elder sons decide to hunt it, assuming its meat will be exceptionally tasty and might even make them immortal. Despite the warnings of the wise younger brother and mother, they go to hunt it. The bird, which is an evil presence, takes over their minds completely, consuming their souls and making them dance to her tune. Meanwhile, the mother has a dream and persuades her youngest son to go to the rescue of his brothers. He does so and manages to save their lives. However, one of the brothers strikes him unconscious and they lie to their mother on reaching home, that they never met their brother. When the youngest son regains consciousness he returns home and kills his eldest brother.

Director’s Note
We the Rabhas, has been listening to this story for generations, though, none seems to look into it from a different perspective. Lately the changing political environment, erosion of human values and globalization has threatened the socio-cultural identities of different ethnic groups. One group of people has totally forgotten the relationship between the nation, the society and an individual. They are concerned only with fulfilling their personal need. Whereas some others are struggling to preserve their socio-culture identity. But the question is –what are the causes of this turmoil? Some are satisfied with accepting ‘external forces’ as the root cause, some blame our inherent weakness. The story summarizes these and many other social conflicts. The play is a theatrical expression of this symbolic story as per my understanding and feelings.

The Director & Playwright
Sukracharjya Rabha (10 April 1977- 8 June 2018) was born in Rampur village of Goalpara District, Assam. In 2001, he founded a theatre group, Badungduppa, a rural based theatre centre in his village. Using Badungduppa as the platform, he directed 26 plays in Rabha, Bodo and Nepali languages during his lifetime. Through his work in theatre, he promoted the cultural heritage of Rabha community as well as other ethnic groups of North East India. He was the brain behind the prestigious “Under the Sal Tree”, a unique research oriented theatre festival. He was the recipient of many a prestigious award and recognition including Bismillah Khan Yuva Puraskar, 2009 for Direction from Sangeet Natak Akademi, New Delhi; Aditya Bikram Birla Kala Kiran Puruskar, 2010 from Sangeet Kala Kendra, Mumbai for his outstanding performance in the field of theatre; and many more. He posthumously received Doctorate in Philosophy in the year 2018 from Guwahati University, a place where he also worked as a Guest Lecturer at Human Resource Development Centre under UGC.

The Group
Badungduppa was established in 1998 in the Goalpara district of Assam by the initiative of theatre lovers within Rabha community. It is the only rural based tribal theatre group actively engaged in making plays with contemporary meaning. Under the artistic leadership of Sukracharjya Rabha, the group has produced 20 plays in last 20 years. The group is regularly organizing workshops for rural artists and a research oriented theatre festival named “Under the Sal Tree”, and Children Theatre Festival annually.