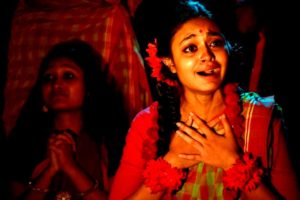 The Play
Kanka, son of a poor Brahmin, loses both his parents when he is an infant and is adopted by an untouchable childless couple. But they too, die soon-after, and Kanka is adopted by a Brahmin, Garga, who gives him good education. Garga’s daughter Leela is very fond of Kanka. Kanka, well-versed in Hindu scriptures becomes a Muslim. His compositions become famous all over the country, but the local Brahmin community hates Kanka and they incite Garga against him. Infuriated Garga poisons Kanka’s food. Leela who has seen this asks Kanka to leave their house. Garga realizes his mistake and his disciples try in vain to find Kanka. It is said that he has drowned. But he comes back only to find Leela, unable to bear the news of his death, dead.

Director’s Note
In this age of moribund capitalism and extravagant consumerism, it is the task of the artist to look into the deep ethnic roots of traditions and culture of the society he/she belongs to. This search inspired us to structure the play with folk motifs and folk music. This episode from the ballads of Mymansingha Geetika has a social significance also. Kanka O Leela has a very strong religious implication. The love of Kanka and Leela is secular and in full accord with the themes of the other episodes of the ballads. And so is the criticism pointed against the Brahmin community which is the main culprit in this case, and also the cause of the tragedy.

The Director
Mary Acharya was an actor in the West Bengal Government State Repertory before joining Kasba Arghya. She has acted in all of Kasba Arghya’s recent productions. She took training in Pandavani from Shanti Bai Chelak and performs Pandavani regularly. She is the Production Controller in Kasba Arghya’s magnum opus production Urubhangam. Mary has also performed in Eugenio Barba’s theatre Odin Teatret in Denmark and has extensively travelled Europe, especially Poland, where she gave a mesmerising solo performance as Lady Macbeth.

The Playwright
Manish Mitra has written eight plays in Bengali including Sankat, Riot, Journey to Dakghar, Binodini, Raktabhumi, Prem Parab Katha and Chanakya, the elaborated script of Urubhangam, Antigone, Before the Germination and many others. In recent times he has initiated a new process of developing plays on the basis of a unique collaboration between a group of musicians and the actors which gives rise to a flowing musicality of the subject text. His work with Sanskrit plays is significant. His plays have been performed widely all over the country and also in Europe.

The Group
Kasba Arghya is a group of creative theatre workers who have been engaged in various theatre activities for the past 27 years. Since its inception the group has worked to preserve its connection with the country’s ethnic roots and has done extensive work on folk dances, folklores and traditional theatre forms of the country under the guidance of eminent theatre director Manish Mitra. It also runs a child repertory with deprived and slum children of Kolkata. The group has travelled globally and the productions Urubhangam and Macbeth Badya have gained international repute. Kasba Arghya’s work with Sanskrit plays is very significant. All Arghya productions are accompanied by live music played by a very efficient group of musicians.