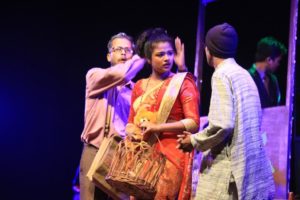 Daya Phukan, a young photographer, lives in an old Assamese house. He is bored of his stress-free, simple and easy life. The kind of life he leads is getting intolerable for him. To bring a change and excitement in his life he decides to beat an old man. An unexplainable situation takes place, and he is sent to jail, gets fired from his job and thrown out of his rented house. But as always, he manages everything and begins a simple and monotonous life once again. Once again he is confused and upset with his life and wishes for a life with fun and excitement…

After graduation in Acting (1990) from National School of Drama, I came back to Assam and started doing theatre regularly. I prefer simple presentations with meaningful expression and theatrical aesthetics. I refrain from the execution of a play with a huge back drop, but I enjoy carrying out tiny details of a small situation from modern life. It gives me pleasure in discovering masks, dilemmas, dreams, conflicts, love and unhappiness of the human being.

In this play I have tried to blend two stories by a young writer Apu Bhardwaj. The protagonist is a successful young man with a job, money and social status, but is discontented for no reason. He wants a change in his mundane life. He is isolated from his family, lives in a metro city, enjoys internet more than obeying his grandmother’s advice and religious rituals.

The play is an analytical depiction of a human being’s desire, void, frustration and the reality.

Born in Rangjuli, Assam, Baharul Islam is a film and theatre actor, and theatre director. He graduated in acting from National School of Drama, New Delhi in 1990 and thereafter formed his own theatre group, Seagull in Guwahati, Assam in the same year. He joined Tara Art, London in 1992-93 for the production of the play Heer Ranjha and directed a short film Rani Gaidenleu in 1997, produced by Girish Karnad for Doordarshan Kendra, New Delhi. He worked as a coordinator in the film Dil Se (Directed by Mani Rathnam), and directed the film Rodor Sithi (Scare Crow) in 2014 which received many awards including the Best Foreign Film award in the Canada International Film Festival in 2015. He has acted in feature films, some TV serials, Tele films and 80 plays. He has designed and directed almost 30 plays for Seagull; plays for NSD Repertory, New Delhi; Ninasam Repertory, Karnataka; Rangayana, Mysore; Banjara Theatre, Mumbai and for many commercial theatres in Assam.

Apu Bhardwaj was born in 1980 at Jorhat, Assam. He is a writer, journalist and sub editor of Satsari Magazine. He is a recipient of Chandraprasad Saikia Memorial Award and Munin Borkotoki Award. His works have been adapted in various languages.

Seagull was established in 1990 in Guwahati by a few young and dedicated theatre activists, including some graduates from NSD. It runs a theatre academy and conducts a one-year training course under NSD Drama Extension Programme. It has its own infrastructure including an open air theatre, studio theatre, rehearsal hall, class rooms and a library, and various wings, each responsible for diverse activities and functions like theatre-in-education, publication, organizing theatre festivals, working for spastic children in association with Sishu Sarothi, conducting theatre workshops for children and youth, and the Seagull Repertory company. The troupe has participated in various national and international theatre festivals.

Watch Meet the Director for this play