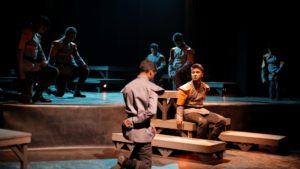 The play begins in a military camp, where the Scottish King Duncan hears the news that his generals, Macbeth and Banquo, have defeated two separate invading armies one from Ireland, led by the rebel Macdonald and another from Norway. Macbeth is a brave and loyal Thane to King Duncan. After hearing a prophecy that he will become king himself, Macbeth is overcome by ambition and greed. Bolstered by the prophecy and his wife’s encouragement, he kills King Duncan and takes the throne. Afterwards, Macbeth’s guilt, fear, and paranoia lead him to commit even more murders to secure his power. His confidence in the prophecies eventually leads to his down fall and he is overthrown and killed by those he had wronged.

Border-crossing and timeless author Shakespeare is one of the focal points in my artistic engagement in theatre for the last twenty five years .Working on Shakespeare’s Macbeth, for me, is questioning about the dynamics of contemporary political power structure in Bangladesh and the globe as well. Since theatrical creation is always a collaborative effort, this production of Macbeth is also an outcome of a group effort that comes from my colleagues and students (performers) in terms of dramaturgy, scenography, choreography and acting. At the Department of Theatre and Performance Studies in University of Dhaka, my works primarily concentrates on the pedagogy of training the students as performers, and then I try to set the aesthetic criteria for a theatrical production that seeks to generate its meaning in relation to the immediate realities of people. They never give the answers to the vibrant questions of the time, but offer various choices so that audience can think and ponder. This production will also engage the audience in same way.

Dr. Israfil Shaheen is an internationally acclaimed director based in Bangladesh, and a Professor at the Department of Theatre and Performance Studies, University of Dhaka. He graduated from the National School of Drama (India) in 1991, and obtained PhD on political theatre from the Rabindra Bharati University (Kolkata, India) in 1999. He served the Department of Theatre and Performance Studies as its Chair from 2006 to 2009. He has taught at Rabindra Bharati University in India, conducted numerous workshops, and delivered lectures on acting, improvisation, and ethnographic research in Bangladesh, India, South Korea, China, Russia, UAE, USA and United Kingdom, Spain, Italy, Poland, France, Czech Republic etc.

William Shakespeare (26 April 1564 – 23 April 1616) was an English poet, playwright and actor, widely regarded as the greatest writer of the English language and the world’s greatest dramatist. His plays have been translated into every major living language and are performed more often than those of any other playwright.

Now after some administrative and pedagogic transformation the Department of Theatre and Performance Studies sets its educational and artistic criteria that envisions to produce Graduates and Postgraduates through its praxis in context of local, regional and global histories, trends, aesthetics and politics.