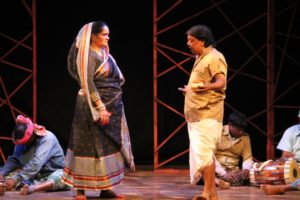 The Play
Nandini, the protagonist of the play, is an individual, not an abstraction, but is pursued by abstraction, like one tormented by a ghost. Nandini knows that wealth and power are nothing but ‘maya’ (illusion), and that the highest expression of life is Love, which she manifests in this play in her love for Ranjan. But love-ties are ruthlessly molested by the megalomaniac ambition, while an acquisitive intellect piles its psychological curiosity, probing into the elusive mystery of love through vivisection.

Director’s Note
It is a vision that has come to me in the darkest hour of dismay. I have a stronger faith in the simple personality of man than in the prolific brood of machinery that wants to crowd everything. This personality – the divine essence of the infinite in the vessel of the finite – has its last treasure – the woman’s heart. The joy of this faith has inspired me to pour my heart into painting the portrait of Nandini as the bearer of the message of reality, the saviour through death.

The Director
Pradip Bhattacharya did M.A. (Drama) from Rabindra Bharati University. He received the National Scholarship and Senior Fellowship by CCRT, Department of Culture, Govt. of India. He is the founder, director, and Guru of Berhampore Repertory Theatre. He has written 10 full-length plays, 6 short plays, and 10 plays for children (Published in Bengali Theatre Journal of West Bengal). He has directed 40 Plays in the last 48 Years. 4 of his plays have won the Best Production of the Year 1988, 1990, 1998 & 2006 awarded by Paschimbanga Natya Akademy, Govt. of West Bengal. He has been conducting Theatre Therapy in Prison for the last 12 years at Berhampore Central Correctional Home (Jail) Govt. of West Bengal. He has directed three plays Tasher Desh, Tota Kahini, and Jakshapuri (Rakta Karabi) by Tagore. Pradip has acted in around 45 to 50 Plays. Some of the memorable characters that he has played are Socrates, Arturo Ui, etc. He has been acting in Television serials from 1994 till date, and has acted in 12 telefilms and 58 Feature Films including a foreign film Shadows of Time. He has organised several theatre workshops with Nandikar, National School of Drama (Delhi) and Max Muller Bhavan; children’s theatre workshops with local schools and orphan boys; and has been organising a National Theatre Festival from 1983 onwards. He has also made two documentary films (Diaha and Prisoner’s Dayout).

The Playwright
Rabindranath Tagore (7 May 1861 – 7 August 1941) was a Bengali polymath from the Indian subcontinent. He was a poet, musician and artist. He reshaped Bengali literature and music, as well as Indian art with Contextual Modernism in the late 19th and early 20th centuries. Author of Gitanjali, he was the first non-European to win the Nobel Prize in Literature in 1913.

The Group
Berhampore Repertory Theatre was set up on 1st January 1986. It has held many theatre festivals and almost every theatre group of India has visited Berhampore. N.S.D. Repertory Company of Delhi, Naya Theatre of Habib Tanbir, Nandikar, Bahurupee and many other groups have visited Berharmpore. It has also arranged many workshops, seminars on theatre, and has introduced school students to theatre by conducting workshops for them. In 1991 a month-long N.S.D. workshop was held at Berhampore.