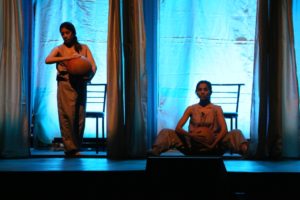 The play begins by establishing how any girl who grows up in an average middle-class family, is expected to become the son of the family. These girls continue to make an effort to become the son of the family till the point they break down. The women have never been taught how to love themselves or respect their own identity. They are conditioned to follow set standards of beauty as per prevailing popular culture. We, the society, want women to play an expected role and follow all social norms. We become insecure with independent women having their own mind. Thus, the play is a constant juggling of the expected roles and the real self, narrated as a story and popular imagery.

When we talk about mental health issues, we focus mainly on the younger generation, denying the other sections of the society, especially women home-makers. If a woman is going through any mental illness, it would reflect on the mental health of the whole family. My research topic for NSD fellowship – “The role of theatre as an aid for mental health for women” – made me question the performance language in which I could communicate with larger number of audience and make them realize how the society conditions a person’s psyche and gives it inferiority or superiority complex which causes anxiety and depression. Bollywood, being a popular medium of entertainment and storytelling, reflects the state of the society, builds and breaks many beliefs, and also influences us. Throughout the performance we have questioned the ways in which the women are being portrayed. In pursuit of ideal role model against the real self, one finds that one is losing own voice.

Freelancer Arpita Dhagat is a performer and performance maker, with specialization in design and theatre techniques from National School of Drama, New Delhi. She has worked as a Cultural Outreach Programmer with LEAF Foundation, under which she has curated and coordinated a month-long arts festival, Abhivyakti City Arts Project. Arpita, as an artist, is keen about different mediums of art expression, and has been exploring how it changes the equation between the audience and the artist, and the art work itself, and what scope of interaction it may open up. She is interested in collaborative interdisciplinary art through performances. She is also a founder member of Astitva Art Foundation, which aspires to grow as an inter-disciplinary art school.

Astitva Art Foundation is a result of artist Navin Dhagat’s vision. It was established in 2002 with the intention to nurture the expression in society. Astitva Art Foundation is a long term commitment in art education for children and interdisciplinary arts. AAF is a group of multi-disciplinary artists coming together and working in the field of theatre and visual arts. The group has also worked as theatre consultant for MGIS (Mahatma Gandhi International School) in Ahmedabad. It has done 21 productions with many shows along with two art residencies and many workshops in Ahmedabad.