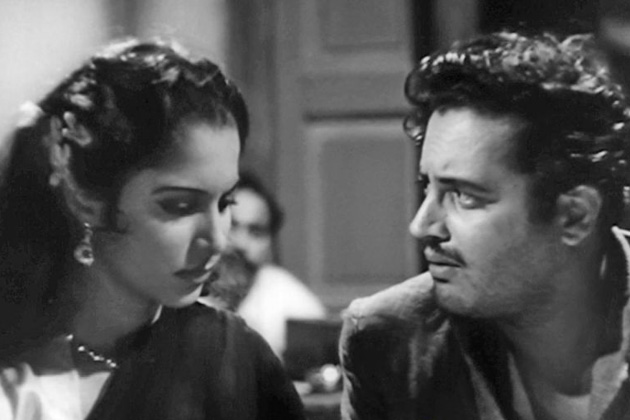 Far away and long ago in 1959, Guru Dutt made Kagaz Ke Phool in Black and White and Cinemascope. In it an unhappily married director falls in love with his protégé. It was a truly felt love-story, which was a resounding flop, commercially. Now, in 2006, it is a cult classic appreciated even by non-Hindi speaking audiences in Europe and America. Nothing has been produced of its calibre in Hindi Cinema in the last forty years.

In truth, the Hindi Cinema of Mumbai, erstwhile Bombay, has regressed into an infantilism that can be attributed to spiritual malnutrition. This decline is part of a larger social malaise, a lumpenisation following the abdication of all responsibility, social and political, by a microscopic educated elite, which has allotted to itself every financial and political privilege.

Cinema, in India as elsewhere, has been an entertainment industry. In other parts of the world hedonism, as a logical upshot of rampant consumerism endorsed by America, has found expression in films. Notwithstanding a very small coterie of dissent representing artistic, mature, committed cinema. In India, particularly Bollywood – as Mumbai’s Hindi film Industry has come to be known – no such force exists.

Legitimate financing of films has always been a problem. Producers, beginning their careers, and even later, have to borrow money from loan sharks at a back-breaking 4 per cent per month (or 48 per cent per annum), thus inflating costs due to production delays; mostly attributed to clashing dates of Stars who ‘sell’ films and try to make the most of their usually short-lived careers. Banks, rarely if ever, back films for they regard them as high-risk investments.

Corporatisation can certainly streamline production methods; keep films within budget by completing them on time. It can, in the near future, also attempt to create an exhibition chain, parallel to the existing one, which represents certain unseen, vested interests. What corporate investment in mainstream Hindi film production cannot guarantee is meaningful yet entertaining films. Entertainment translates as ‘manoranjan’ in Hindi. It is an exquisite word, meaning painting or rather illuminating the mind – since any idea of painting involves light.

Things are quite different in reality. The average Hindi film celebrates mindless sex and violence, and mirrors consumerism imposed from without by America and its adjunct, satellite television. In Bollywood, there is hardly any attempt to open the mind to beauty. It is assumed that the average filmgoer whether the rural poor, middle class, rich and city bred is no more than a creature responding to limited aesthetic stimuli.

He likes to see on screen flashy clothes, fast cars, skimpily-clad women, huge gaudy sets with the latest gadgets and people putting away enormous quantities of alcohol and rich food: to top the topper – blood and gore punctuated by inane dialogue and ‘item numbers’ that show acres of female flesh gyrating to loud music. This assumption is both true and untrue because it is precisely those Bollywood products that contain these elements that succeed financially. But box office success also has a rider, that the film be interestingly narrated. It is incorrect to assume that people, rural and urban, cutting across class barriers, want to see only one kind of cinema. For the record, only ten percent of the commercial Hindi films released make money, another fifteen percent break-even and the rest sink without a trace.

The exhibition, distribution and financing of motion pictures in Mumbai is usually controlled by a shadowy Underworld. It dictates the kind of films that get made and seen. The strategy of this conglomerate is simple – limit the choice of the paying customer and make him believe what he sees is what he likes. This formula does not always work, because of the shabbily written scripts and badly structured, sluggishly paced editing.

It is no secret that black money had entered the film industry by the mid-1960s. There is a photograph still in circulation of Hindi Cinema’s greatest showman – Raj Kapoor touching the feet of Mirza Haji Mastan, the first known gangster-smuggler of Bombay who started as a coolie on the docks. Ratan Khatri, king of the numbers racket, even had a film made on himself. The Dholakiya brothers, who once owned Caesar’s palace, a nightclub, which was mainly a rendezvous for prostitutes and their clients also had a financial interest in certain films. Dawood Ibrahim and his lieutenant Chhota Shakeel had others front the productions they had backed. Producer S H Rizvi – said to be Chhota Shakeel’s man – was picked up by the police on the basis of a tapped cell phone conversation in which he had named a prominent Indian right-wing politician who had always gone out of his way to help him. To say that gangsters and politicos work hand in hand these days is an unassailable fact.

It is now possible for a fugitive from justice to be a resident of Dubai and actually dictate through his operatives in Mumbai the kind of films that are to be made and the people who will feature in them. Recent revelations in the press of non-controversial singers like Alka Yagnik and Kavita Krishnmoorthy having sung at Dawood Ibrahim’s sister’s wedding fifteen years ago only confirms the idea of the Hindi film industry as always having been an extension of the Underworld. The prospect is both frightening and revolting.

Amitabh Bacchan’s biggest hit in 2005 is Sarkar, modelled on Mario Puzo’s The Godfather. It is directed by Ram Gopal Varma, a Hyderabadi entrepreneur who rode to fame and fortune on the crime wave. He did Satya, a well-researched glamourised look at the world of crime, then followed it after several years and films later with Company. His assistant E. Niwas did Shool, on an honest police officer whose wife is violated by thugs and who is himself largely marginalized by politicians and gangsters working in tandem – till the last ten minutes before the finish.

What of Prakash Jha’s two films that profess to be on the side of the law? In Gangajal you have a strong committed cop going hammer and tongs to straighten out a corrupt town run by a nexus of thugs and politicos. Apaharan has a decent, unemployed boy forced to take up with gangsters and to kidnap a Chief Minister’s daughter. Whatever the message tacked on at the end of either film, violence is glorified and the triumph of evil over good obliquely suggested.

If gangland money is not involved in the production of a large number of Hindi films, why then is there a glorification of the gangster? Why is there a palpable suggestion that the State itself is in connivance with organized crime and is indeed giving it a fillip? No matter which party in power, crime and politics seems to feed off each other and terrorize the law-abiding citizen through the police.

Samuel Johnson had observed that patriotism was the last resort of the scoundrel. A rash of patriotic films like Refugee, Gadar, Border, LOC Kargil and Lakshya only make clear that dubious intentions of the filmmakers and the backers, seen and unseen. Wars from time immemorial have been fought for strictly commercial reasons. The only morality involved is amorality.

The advent of the multiplex in cities has raised the price of admission tickets by at least three-fold. But the films that get shown in these claustrophobic halls, usually equipped with state-of-the-art projection facilities, are mostly mediocre. There is, contrary to the vociferous claims of the industry and its supporters, a woeful lack of talent. Not technical talent – God knows there are enough cameramen, sound recordists, editors and special effects personnel who can deliver a product of international quality. But there are no directors or scriptwriters of vision and integrity. Bollywood perhaps does not need them.

What would corporatisation achieve other than a cosmetically pleasing product that can be marketed to captive NRI audiences in the U.S., Canada, Australia and England? Today a film’s national box office revenues account for only 40 per cent of the total earnings; the other 60 per cent comes from overseas rights, sale of music albums and DVDs. Unless there is a clear segment of the market a corporate film concern wishes to target with films that are not only technically fine but aesthetically pleasing, nothing of lasting value can be achieved.

The Italian, Irish and Jewish mafia in the USA went legitimate by gradually laundering its black money through investments in big, reputed industrial concerns. It is rumoured that something similar is happening on the Indian subcontinent. Although there are new players in the game, Dawood Ibrahim’s shadow continues to loom large over Bollywood. The content of a film is as important as the technique used to express it. Hindi films continue to be caught in a reactionary political, social time warp. What good then can possibly come of Adlabs being bought by the Ambanis who own Reliance?

Will the day ever come when simple, elegant, deeply felt films shall engage with an audience of mainstream Hindi cinema? Will such efforts be made possible by the active patronage of a paying audience? One can only hope.