The Restaurant of Many Orders 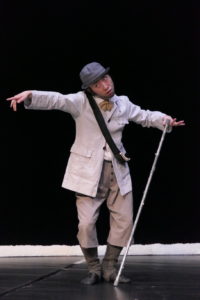 The Play
The Restaurant of Many Orders, is a dance-drama which focuses on the relationship between human beings and nature. Inspired by Japanese fairy tale writer, Kenji Miyazawa&#39;s novel by the same name, Hiroshi Koike created this production where three performers play the role of human beings and the beasts in the forests. Three young men go to the mountain for hunting. The weather becomes bad and there is a storm. They try to take shelter from rain but they can&#39;t find a good shelter. Suddenly, they see a restaurant, The Mountain Cat Inn Restaurant. On entering the restaurant the hunters get many written ‘orders’. Feeling strange, they do what is written. Meanwhile, two of them realize that the third man is missing. They enter another room and find delicious food laid on the table. Eating greedily, they find a piece of cloth of the third hunter in the dish. They realize that they have eaten the body of their friend and run out of the restaurant facing the big storm.

Director’s Note
The Restaurant of Many Orders, is a comedy plus a tragedy. Some people think it is a scary story because the hunters open the hidden door of the forest continuously. However, what makes this fact scary? That’s my question. The world is human-centered, but is it of any benefit for us? This production is not the exact rendition of the story of the original novel by Miyazawa. I hope you not only follow the storyline, but see and feel the thought behind it.

The Director
Hiroshi Koike is a director, writer, choreographer, and the president of Performing Arts Institute. After working as a TV director, he established the performing arts group Papa Tarafumara in 1982. Since then he has worked on the production, direction and choreography of 55 works. In 2012, the following year of the big earthquake of 11 th March in Japan, he launched Hiroshi Koike Bridge Project. He had collaborative projects with three ideas of education, dissemination and creation based on creativity. He has produced 9 works until now. His shows have been presented in about 40 countries so far. He has conducted many workshops in Japan and abroad. He has served as the Artistic Director for Tsukuba Performing Arts Center; Chairman of the Asian Performing Arts Forum; and Committee Member of Japan Foundation (2005 – 2011).

The Group
Hiroshi Koike Bridge Project (HKBP) is a theatrical company started on June 2012 by Hiroshi Koike, after he had closed his former theatrical company Pappa Tarahumara, the forefront of performing arts of Japan for 30 years until it was disbanded on 31 May 2012. Not only does HKBP produce performing arts, but also makes use of various media, such as film, photography, installation works and essays. By means of events, lectures, workshops, and educational programs, it aims to educate people who can think through their body and create bridges between the world, time and culture.