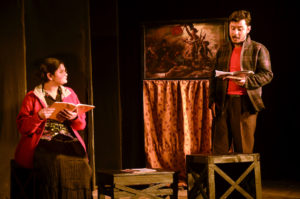 The Play
The play is set in Berlin, Germany, in early thirties of the past century. Dr. Mamlok, an eminent Jewish surgeon, a patriot who had served in the national army, gets upset on finding the jeopardy of national unity in the name of caste-creed-religion and political beliefs, under the rising of Nazi regime. He and his daughter are molested by Nazi-hooligans, and he is barred from working in his own hospital. He is threatened by his subordinate Dr. Helpach, now a Nazi official, to be publicly molested with his whole family. Mamlok’s pride cannot take it anymore. He commits suicide in order to escape the life of endless torture.

Director’s Note
The play Professor Mamlok written by German playwright Friedrich Wolf, and translated in Bengali by Utpal Dutta inspired me to write and direct this new play Deyal-Likhon (The WallPost). I found this a challenging offer to handle such intricate shades of human emotions and relationships in the whirlpool of socio-political unrest. Its original realistic pattern doesn’t suit my current text, rather demands nearly an expressionistic Epic-Theatre style, with input of a lot of modern theatrical imaginations and innovations. With a great challenge I enjoyed it thoroughly as a director.

The Director & Playwright
The career of Asit Basu as a playwright and director spans over more than half a century in the field of performing arts in West Bengal. Being a close associate, assistant director, and leading actor of the late maestro Utpal Dutta, he established himself with a keen sense of socio-political awareness in his works. He presented legendary stage productions like Kolkatar Hamlet, Raangtar-Mukut, Mrtyuheen Praan, E-Maha Jagaran, Charandas Mla Evam Nautankilal, etc. in the group Theatre Movement. His directorial works like Kirat-Parva and Kusha-Puttalika and his designed production Jaan-E-Kalkatta enjoyed the honour of being showcased in BRM with great appreciation. He has also excelled in the field of Jatra (Traditional Theatre of Bengal), TV and Film, and as a documentary film maker.

The Group
Paikpara Akhor was formed in 2007 under the guidance of Guru Asit Basu. The group endeavours to practice theatre with national and regional cultural identity that is facing a fatal threat due to the world-wide invasion of ‘Global Culture’ in present times. Sri Basu has trained new directors, actors and playwright under his esteemed guidance. As a result Ms. Bhadra Basu has emerged as an eminent playwright-director since 2009 with productions like Jaan-E-Kalkatta, Preetilata, Mala-Chandan etc. This group is trying to bring theatrical awareness amongst children with proper training and practice. Since its inception this group has successfully staged Shiber Gajon, Pratirodh (a Street Play), Jaan-E-Kalkatta, Kathtaamrita, Preetilata, MalaChandan, Dukhiram, Meni(Binodini)-o-Kolkatar Theatre, Dukhiram, Manik, Rupmoti-Gatha, and recent production Deyal-Likhon. The group has performed hundreds of shows altogether, winning the hearts of the audience, all over the country.