I went to “Bharat Rang Mahotsav‟15” which takes place in National School of Drama. I attended few folk plays there and out of all the plays following are the two I liked most. 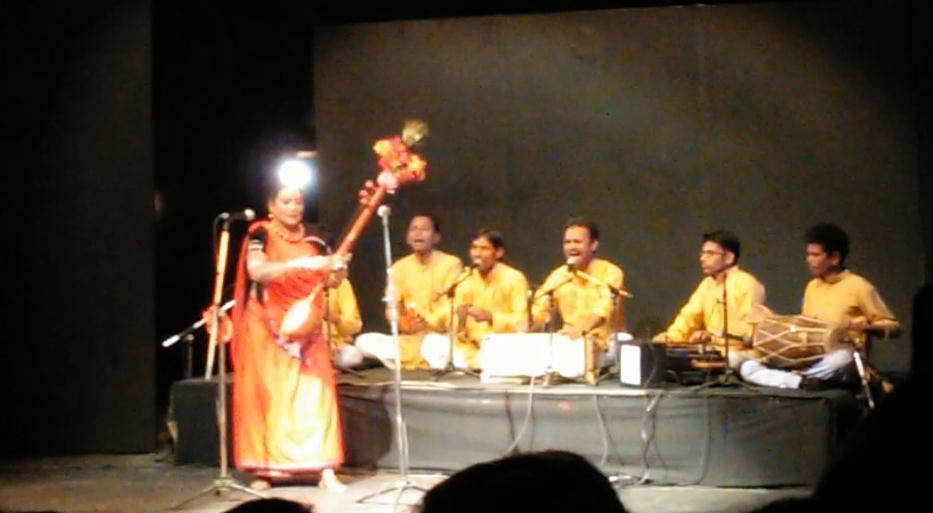 ‘Pandwani’ is a form of play from Chhattisgarh. The Director of the play is Teejan Bai. It  depicts  the  story  of  the  Pandavas,  the  leading  characters  in  the  epic Mahabharata.

It is narrated in a very lively form. The lead artist narrated one episode after another from the epic in a very forceful manner. She enacted the characters in the scenes to produce a more realistic effect. Occasionally, she also breaks out into  a  dance  movement.  During  the  performance  she  even  sang  along  the rhythm produced by the ektara held in his hand.

There are two styles of narration in Pandwani; ‘Vedamati’ and ‘Kapalik’. In the Vedamati style the lead artist narrates in a simple manner by sitting on the floor throughout the performance. The Kapalik style is livelier, where the narrator actually enacts the scenes and characters. Teejan Bai has been the most popular artist of the Kapalik style in the past five decades.

This form of play is from Gujarat the following three skits were performed. The  very  first  script  was  on  socio-economic  aspects  of  the  forest-based agrarian society. The tribes believed that the forest belonged to them and no- one  else.  Not  even the  government  had  any  right  over  it.  But  British  took control of the forest with the Forest Law of 1842, prohibiting the free usage of forest  by  natives.  This  skit  was  created  in  order  to  express  the  anger  and protest against the law.

Another play performed was Sautish; Sautish in Dangi translates as ‘Sautan’ in Hindi or Polygamy. Polygamy was not socially accepted by a large part of the society. This skit in the most hilarious way portrayed the position of a husband with two wives. This universal story of a man with two women and their eternal quarrels remains the same for each society.

The last one was; Vagh-bokadi. It was quite common to encounter wild animals like tigers and bears in Dangs. Many a times they lost their cattle too. This skit refers to the everyday presence of wild animals in Dangi life and how they bump into these animals. Vaghdev was feared and yet worshipped. These contradictory emotions of love and fear are expressed in this skit. It is a comedy depicting an incident of a tiger eating the wandering goat of a careless Dangi farmer.

Bhavai is the folk Theater of Gujarat, the homeland of Mahatma Gandhi. Backward inhibited the people are known for their shrewd business acumen. The  rich  and middle  class  are  colorless.  But  the  farmers, craftsmen,  village artisans, poor and less inhibited bring color to their folk arts.

Gujarat state has two extremes. The upper class are prudish and preach and puritanism. The lower strata derive energy from the worship of Amba Mata, the Goddess of Power. The bhavai is performed during Navratri in form of shrine of Amba Mata. The players are convinced that the goddess attends the performance. That  word  bhavai  has  several  interpretations.  ‘Bhav’  means  ‘life’  ,  ‘bhava’ means ‘sentiments’ and ‘vai’ means ‘carrier’ or a ‘diary’. So bhavai could mean “carrier of life” or “expressive of sentiment” or “diary of life”.

It was started in the early fifteenth century by Asita Thakur. A Brahmin of the Audichya Clan. He recited scriptures singing the texts and explaining their meaning to the devotees in the precincts of a temple in town of Sidhpur. An unusual incident turned  Asatia into the originator of a new  form of drama. Ganga beautiful daughter of the farmer of a neighbouring village was abducted by Muslim Chief. The villagers were infuriated, but no one dared challenge the Muslim Chief. Asaita Thakar went to him and pleased him with his singing. In return he asked him to set Ganga free, claiming that she is his daughter. The Chief knowing that Hindu orthodoxy did not allow a Brahmin to eat from the same plate as a farmer’s daughter put the poet singer to the test and asked him to eat with Ganga. Asaita ate and thus brought her back, but he was ostracized by his community. This turned him against Brahmins. He left with his  three  sons  and  decided  to  earn  his  living  by  singing  and  acting.  He composed play let’s attacking social injustice, prudery and the caste system.

The  three  sons  were  boycotted  by  the  society,  their  families  were  called ‘Trigala’. Today  trigala  is  itself  a  caste  and  inheritor  of Bhavai. The  village  headmen  were  grateful  to  Asaita  and  promised  that  in  future village  headmen  would  look  after  the needs  of  Asaita’s son  and  grandsons wherever they performed.

Asaita’s plays are an integral part of every troupe’s repertoire. A famous one is ‘Joothan Mian, others are Kajora, Chhail Batau etc.

In spite of the deep devotion of its players to the goddess, the bhavai is secular at its roots. Its jokes, dances, themes and songs deal with the life of common people. Mythological heroes are rare. It is the saucy maid, the miserly merchant, he betraying wife, the romantic stranger, the lascivious old man, the braggart,who regale the audiences.

A  Bhavai  troupe  consists  of  fourteen people,  the  Naik  who  is  the  director, stage manager and the leader of the party, who holds license to perform on other districts. The two male actors (Veshgor and Veshacharya) playing the hero and the secondary hero, the female actors (Kanchaliyas) of heroin and secondary heroine, the clown (Rangalo) and the instrumentalists. The troupe members are expected to observe celibacy for six months during performance time. Hindus generally believe that celibacy contributes to willpower and physical energy.

The Bhavai, like Tamasha is down to Earth. Women do not go to see it and this allows actors more freedom in vulgar jokes, abuses and off colour remarks. The women in Gujarat observe purdah an influence of century’s old Muslim rule and Hindu orthodoxy. She draws ghunghat across her face and looks through the fine muslin or silk as she talks. She speaks even to her husband behind the veil. Because of her purdah, men always take part of women in the Bhavai.

The lamp is placed on two bricks near the wall on which Amba Mata’s trishul (trident) is symbolically drawn with the white dots around it. The actors pass their hands over their eyes and foreheads to incorporate light. The sputtering lamp is the incarnation of Amba Mata. A symbol of power, it gives light and dispels darkness. The actors worship it. They put incense, fruits, camphor and coconut in front of it.

After  putting  on  their  makeup,  the  players  sing  a  devotional  song,  garbi, invoking the goddess, and then walk to  the arena, where the Naik draws a circle with a ten foot radius on the ground using the point of his sword. This is the  acting  area  (paudh  or  chachar),  sacred  place  only  the  performers  can enter it. The actors and singers sitting in the paudh sing 5 devotional songs Then they rise and invoke the mother.

The instrumentalists are placed on one side. The Pakhawaj has a drum slung horizontally around his neck. The narghan player has a pair of small drums tied around his waist, and he plays them standing. One man jungles the sarangi, producing the subtlest undertones and overtones. The cymbal player adds metallic rhythm and clang. The most dramatic and unusual instrument is bhungal, a five foot long pipe with the tapering mouthpiece and a large bell shaped end. The bhungal folds up like a telescope. Its trumpet like sound is used for entries, exits and climaxes. The two bhungal players must have good breath control and stamina.

When the first invocation is sung, only the bhungal notes accompany it. No drum or cymbal is allowed. No one dances. Everyone is in meditation.   During the invocation all the players are in paudh. The actors who are part of subsequent scene suddenly disappear. The actors slip into the dressing room in turn as their cues approach. Other actors are part of chorus. Every one of them can sing and dance and can play an instrument.

After this God Ganesha is invoked. The actor playing role of Ganesha wears ankle bells, a yellow silk dhoti, a silk jacket, garlands, and a cap. He holds a shining brass plate and moves it horizontally and vertically before his plate. The  brass  plate  is  there  to  hide  his  face  since  no  one  is  expected  to impersonate Ganesha.

When the  prayer to  Ganesha  is  over, The  village  barber walks through  the passage carrying a big brass torch. In olden times the torch was invariably of silver if the Bhavai troupe was prosperous. When an important character is to strike a pose, the barber promptly rushes to him with his flaming torch and moves along with him, highlighting his facial expressions.

The performance starts about 9 in the evening and continues until eleven in the following morning. A sequence of dialogue completing a thought process or an incident is marked by a brisk dance phrase. The Naik speaks out the drum syllables: tata-thai thai, tata-thai thai, tata thai ta. The characters dance to the rhythmic syllables which are repeated three times. This breaks the monotony of the spoken word and stitches together the rambling dialogue.

Each  character  carries  his  own  costume  and  does  his  own  make  up.  The colours mostly used in makeup are white, red and black.

The characters of humbler social status like a barber, a farmer, a merchant, a scavenger or a gardener do not use any makeup or period costumes. Kings and Chiefs have exaggerated moustaches, eyebrows and a faint reddish paint over  their  face.  A  king’s  costume is  a mixture  of  the  Mughal  and  the  local Gujarati folk style. The tunic is tight at the waist and flares below. The pyjamas are narrow at the claves. and bulge at the thighs.

The Brahmin is dressed in a thin, red bordered white dhoti. The sacred thread (janiyau) runs from his left shoulder across his bare chest down to his waist at the right. On his forehead three lines of sandalwood paste with two crimson spots in the centre. Wearing a tilted cap on his close shaven head, he carries a brass jug in his head and scriptures under his arm.

The actors have very few costume changes. The same actors may  play different characters. By tilting their  turban,  changing  his  gait, changing position of the scarf etc.