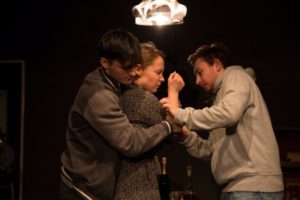 The Play
After the final exams at a regular school, four school children realize that they will not pass the exams and the result would be disastrous to their future career. The teenagers enter the house of their teacher Elena Sergeevna and demand the key to the safe in which the examination papers are stored. At first, they try to persuade the teacher and then they try bribing her, and in the end threaten to blackmail her. But the principled teacher does not agree to the deal and tries to explain to the school children all the meanness and baseness of their actions.

Director’s Note
In Dear Elena, the youth are four students and their hostage is their teacher, Elena Sergeevna. The student leader, Volodya, is a handsome and innocent looking kid, yet his mind is where his heart should be. He is ready to commit even rape to break Elena Sergeevna, and terrorizes her by saying that it would be out of ‘a purely sporting interest’. Complete rejection of morality and social norms has made him a sociopath. Part of the complexity of this play is that Elena Sergeevna herself is in a way compromised. She herself is a moral woman, but her fidelity is towards an indefensibly corrupt system. This story is not just about students and teachers, or kids and adults, it is about the modern Russian society and the conflicts between different type of people in Russia, and the conflict of different ways of upbringing in the modern society.

The Director
Vasilisa Teplyakova finished Gitis (Russian Institute of Theatre Art) as an actress in 2014. She works as an actress and director in different independent theatre projects, and as a teacher in the Institute Of Theatre Art, and is pursuing Ph.D. at Gitis.

The Playwright
Lyudmila Razumovskaya is a Russian playwright. She received an assignment from the Ministry of Culture to write a play about ‘difficult teenagers’. Hence she wrote Dear Elena Sergeevna. Although the ministry rejected it, the play was staged in Tallinn (in Estonian) in 1981 and in Leningrad Lenkom in 1982. The performance was a huge success, the play was accepted by more than 20 theatres of the country, but in 1983, by order of the Ministry of Culture, it was removed from the repertoire. Allowed again with the beginning of Perestroika in 1987, the play was staged a number of times abroad, including more than a hundred theatres in Europe. Since Lyudmila’s plays too openly reflect the state of the society, the Ministry of Culture allowed the performances only after censoring parts of the original text.

The Group
Artem Nazarov’s Workshop is a community of young, talented actors who have just graduated from the Institute of Theatre Art. The artists are experienced in acting on different type of stages, from small rooms to big auditoriums and also street stages. The group has six different plays in its repertoire and is always ready to play for charity. The actors annually take part in the festival of theatre schools of the BRIC countries, in performances by Valentin Teplyakov. These artists are young, ambitious, and most importantly, in love with Theatre.