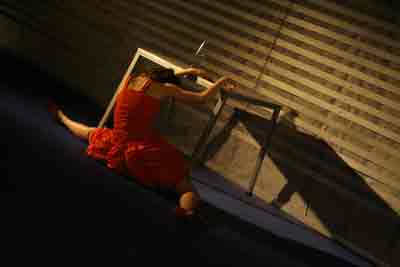 Tuesday (11.01.2011) was not as cold as the previous days.  The sun was in the sky and the earth was having a sigh of relief.  The atmosphere in the food hub (In 13th Bharat Rang Mahotsav) was a little bit warmer. Theatre fans and enthusiasts were talking about the plays being staged in different auditoriums. The question before me was whether to see`Muare’ (an Argentinean play) or `Begam Ka Takiya’ (a Hindi play by Ranjit Kapoor). I was sitting with NK, Banwari Taneja and Sudesh Syal (all of them theatre personalities). There was divided opinion there about the `Muare’. NK was not enthusiastic to see it but Mr. Taneja and Mr. Syal showed their willingness. Since I had already scene `Begam Ka Takiya’, I  preferred to see `Muare’ and  joined Mr. Taneja and Mr. Syal. Earlier Rijhu Bajaj (actor/director) showed his willingness to watch it. But later on he declined. He wanted to do some purchasing for Shabdakar’s coming production `Roop Aroop’ in this festival on 17th January).

Was `Muare’ a satisfying play? For me, it was not. For others I can’tsay. It was unlike other South American plays being shown in the festival. It was a play basically of movements and physicality. There were two characters, both of them female. They were showing movements and stillness through their bodies. The concept was that a party is happening outside and two women/girls are trapped inside, in a small room. They are reciprocating to outside world through their bodies. The brochure of the play says that the production is based upon a novel, a breath of life, written by Ukranian-Brazilian writer Clarice Lispector. Lispector wrote this when she was about to die. She saw the world as someone seeing it through a magnifying glass. The actresses duo, who are directors also, Marina Quesada and Natalia Lopez,  treat their bodies as containers of a multiplicity of beings that reveal the different dynamics, qualities and expressive possibilities. They tried to create forms and deformities to portray the agony of human being outside of a happening, a party or anything like it.

Of course there were claims by the directors about the experimentation, but was the play really communicable? It might be so in Argentina, but certainly not in India.  One can argue that we Indians only appreciate narrative plays and are not sensitive for physical theatre. But is it really correct? Many plays of movement are appreciated here by a large audience. Perhaps the difference of culture became the obstacle. Or maybe it was not so? The question remains.