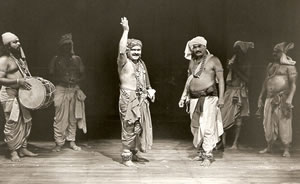 Music appeals to the emotional side of the human nature. Music stirs, births, expresses, fires, harnesses, channelizes and tempers emotions. Music precedes the development of language as a form of expression. That is because music is present in nature even before the human is born as an individual or a species. In his bid to emulate the sounds of nature man becomes musical. And yet in amputating himself from this connection with nature, in the process of socialization and civilization the human loses touch with the lyre within, coming to a point of dis-ease or an absence of ease.

Man has instinctively known forever about the healing aspects of music. Speaking about this knowledge in context of Indian music, Alain Daniélou the late Director of the International Institute for Comparative Music Studies and Documentation, Berlin, opines that “a general Sanskritic theory of music, termed Gāndharva Veda, was elaborated at a very early date.” He continues saying that it seems that the Gāndharva Veda studied every use of musical sound, not only in different musical forms and systems but also in physics, medicine and magic.  Music makes the human ‘whole’- in harmony and in balance.   Don Campbell says that bringing a body in to balance requires observing the orchestra in it’s entirety, it’s current condition and past experience, it’s inherent strengths, it’s potential for improvement. And the real genius of healing lies in teaching the body, mind, and heart to discover and play their own music-not something that has been dictated by social norms. If one is to examine healing in terms of emotion, then the process of healing involves the transformation of one kind of emotion into another. The Natyashastra of Bharata mentions about nine primary emotions orrasa-s. Rasa is the Permanent Mood when it is revealed through enjoyment[i]. The nine[1]accepted Rasa-s are: the Erotic (Sringara), the Comic (Hasya), the Pathetic (karuna), the Furious   (Raudra), the Heroic (Vira), the Fearful (Bhayanaka), the Odious (Bibhatsa), the Marvellous (Adbhuta) and the Tranquil (Santa). The catalytic process of music is aimed at transforming the dominant emotion into another emotion or reducing the severity of the emotional experience, incase the dominant emotion is a disease producing condition or itself an offshoot of the disease. For example sadness at one extreme becomes depression, which can in an extreme case also lead to a suicidal tendency. Music used appropriately with this emotion can aid in an expression that may not be spontaneously available to the individual due to disease related pathology.

It has been noticed that during conditions of illness, it is human tendency to revert to prayer, because of the impact faith has on the psyche, and the immune system. The greater is the patient’s faith that they will get well and the more they silently pray, the lesser is their expectation from medical cures alone and also greater is the likelihood of them becoming well due to their own willpower. The reason is twofold: first, prayer takes the mind of the patient away from the disease and negative thoughts. Secondly, it gives a positive affirmation to the body’s own immune system to fight the disease. Music unobstrusively becomes a catalyst in this process.

If one is to use music for therapeutic purposes, it is crucial to understand two principles: Entrainment and Isoprinciple. Entrainment is simply the principle from physics that tells us that our biorhythms tend to synchronize with the rhythm, tempo, or pulse of the music. We instinctively choose slow music when we want to calm down and faster music when we want to energize ourselves. The isoprinciple states that in order to change a person’s mood with music, one must first begin with music that reflects the state he/she is in to start with. If one is feeling depressed one cannot simply put on “happy” music to change the mood. It must be done slowly and carefully.

When we mention the term music therapy we need to remember that in therapy, music is specifically used to achieve non-musical goals.  Music can both be used as an alternative, stand-alone therapy as well as a complementary therapy in addition to traditional medical procedures.

There are four levels of music therapy practice:

Music therapy is an interpersonal process in which the therapist uses music and all its facets- physical, emotional, mental, social, aesthetic and spiritual- to help clients to improve or maintain help. The music used in therapy maybe specially created by the therapist or client or it maybe drawn from the existing literature in various styles and periods.[ii]

Prateeksha Sharma, Ph.D. works as therapist-researcher-musicologist and is founder, Hansadhwani-mind.mood.music. The latter is a research-led knowledge enterprise creating diverse services and solutions for different demographics on the interface of psychology, education, music and wellbeing. Her website is at https://www.prateekshasharma.com/. She is reachable at hello.prateeksha@gmail.com.