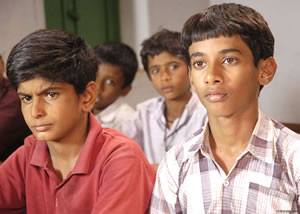 Bengaluru: The 5th International Children’s Film Festival, the only one of its kind in the country in terms of its reach, closed  earlier with all participants emphasizing the importance of making meaningful films that were entertaining and yet sent subtle messages that the young could understand.

A major effect of the festival was the large number of children who said they wanted training to be able to make animation and live action filmsfor the young.

Karnataka Secretary for Kannada, Culture and Information B R Jayaramaraje Urs said the very fact that several thousand children from more than fifty schools had attended the festival, and the fact that it had been held in five towns and cities of the state simultaneously, showed how popular children’s films could be.

Speaking at the closing ceremony of the Festival, he promised all help from the state for promotion of children’s cinema in the state and said the Government was actively considering the subsidy for children’s films from two to four films every year. At present, two films get Rs 2.5 million each per year.

Others present at the closing ceremony included Mr A R Raju who is a former Vice-President of the Film Federation of India, the popular starRamesh Arvind who stole many hearts with his presence and antics on the stage, and director V Manohar. They made a plea to parents to ensure the young got to see good films and said it was necessary for the government or the exhibition sector to make arrangements for such screenings.

The Festival organized by the non-governmental Children’s India in five different towns and cities in Karnataka was aimed at ensuring that children even in remote places got to see good films. The Festival was held simultaneously at Bangalore, Tumkur, Davangere, Bijapur andHampi (Hospet).  The District Commissioners along with local NGOs supported the Festival at all the venues outside Bengaluru and ensured greater participation of children.

Mr Urs also released the souvenir of the Festival, which apart from giving details of the Festival and having several articles on children’s cinema, also has messages of the President Pratibha Patil, Karnataka Governor MrRameshwar Thakur who had inaugurated the Festival, Karnataka Information Minister Mr Katta Subramanya Naidu, and Children’s Film Society, India, Chief Executive Officer Kuldeep Sinha who was the Guest of Honour at the inauguration. The Festival was also attended by Andhra Pradesh Children’s Film Society Chairman M Vedakumar.

In a surprise announcement, Mr Anis announced a proposal for a co-production between Colombia , Italy , Tunisia and India for a children’s film.

Mr N R Nanjunde Gowda, founder of Children’s India , called upon children who had ideas to come forward the way Master Kishen or the two children from Bangladesh were doing. He said his organization would annually organize a workshop for children on filmmaking.

Master Likhit, who has won the Karnataka State Best Child Actor awardfor his role in the film ‘Naanu Gandhi’ was felicitated on the occasion. The film’s director Nanjunde Gowda earlier received an award from Carthagena International Film Festival in Colombia Gerardo Nieto in the Children’s films (education) category.

The main inauguration by Karnataka Governor had taken place in Tumkur, around 70 km from here, in the presence of Dr Shivakumar Swamiji of Shri Siddaganga Mutt, Tumkur, Karnataka Minister of Law and Parliamentary Affairs Suresh Kumar, Mr Kuldeep Sinha, KFCC Vice-President Rockline Venkatesh and actress Mrs Shruti Mahender, among others.

More than forty films from over ten countries including India had been screened at all the venues in the five towns and cities. A seminar on the future of children’s cinema in the age of television, and Open Forum discussions with all the delegates and directors from India and overseas, were also held during the Festival.

The Festival had special packages from Colombia and Bangladesh apart from films from Italy , Iran , Germany , Sri Lanka , Tunisia , China , the United States and other countries. The Festival also paid a tribute to seventy-five years of Kannada cinema with the screening of nine acclaimed children’s films. There was also a package of films from the Children’s Film Society , India , in Hindi, Bengali, Assamese, Marathi,Manipuri, English and Kannada.

The Children’s India was launched by Mr Gowda in 2005 to empower and expose young minds to theatre, performing arts, training workshops on animation and various other creative pursuits.