An electric performance of Kalaripayattu by Sree Narayana Guru Smaraka Vallabhatta Kalari Sangam (Chavakkad-Kerla, Bangalore and Brussels) initiated the celebration of a decade of Environment Support Group’s work advancing environmental and social justice initiatives. Soon this was to be followed by a scintillating recital of Odissi by danseuse Diya Sen. On a calm winter evening, when most of Bangalore was unusually quiet with most vehicles resting without fuel to run (given the week long fuel strike), folks who braved the skeletal public transport enthusiastically greeted the artistes’ repertoire with gusto.

The crisp, energetic, robust and daring movements of the Kalari troupe, interspersed with many organic body movements (including one that revealed the body can be massaged with a sword) demonstrated years of discipline and practice produces such extravagant martial arts – a fitting tribute, as it were, to the spirit of upholding the wider public interest. It was akin to the effort demanded for setting afire the imagination of people in advancing public interest – tireless effort and perseverance are uncontested ingredients.

Prof. B. K. Chandrashekar, former Chairman of the Karnataka Legislative Council graced the occasion to release the Decadal Report of Environment Support Group. His argument for regarding and supporting such work as ESG’s was involved in, was precise and persuasive. He narrated his experience in fighting for years to protect a public space in one of Bangalore’s neighbourhoods, against a variety of powerful interests. Despite all the influence he could muster, it took him years and a Public Interest Litigation in the High Court, to ensure that the public space will be a park and nothing less. Considering that scale of effort was involved in saving but one neighbourhood park, the work of ESG, in comparison, was quite remarkable he argued. He did wonder why perceptions were so negative against NGOs when, the work that was advanced was so clearly in the wider public interest. Divergence of opinion is but a healthy process – that should not be the basis for conflict, instead efforts must be in converging different view points and perceptions to advance public interest for the benefit of this generation and generations to come.

Diya Sen greeted this message with grace, fluidity and a temperament that was characteristic of Lord Krishna’s voyeurs pleasing his angry lover Radha. Purna Chandra Majhi vocalised the concern accompanied as he was ably by Gandhi Mallik on the Pakhawaj. The tempo was set, and the romance of the evening reached a crescendo with Sunil Kant Saxena on Sitar offering soulful companionship. Sujit with the lilting sounds of his flute lifted the human spirit to dimensions unconquerable in mere words 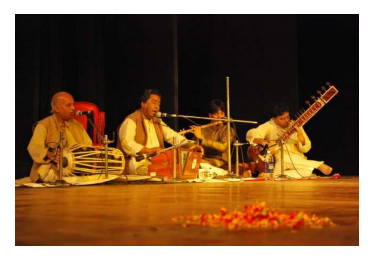 The Celebration of the human spirit was complete. Acknowledgements flowed in plenty, and the warm and supportive audience gathered to congratulate the performers and each one of the team members of Environment Support Group for advancing past a decade in work that was challenging and often shyed away from. Every day we engage with issues of conflict. Every day we look on the other side of development and worry for those who don’t get any of it. Every day we look for solutions to problems that are extremely complex – and more often than not considered not even problems. Simply because they cannot be factored in financially and economically and have a word now – externalities. In such a world where real issues are not issues, where financial scams galore crash the edifice, structure and innards of the capitalist world that has brought us teetering on the edge of climatic disaster, celebration of the deep and greater human spirit is in order.