Without Boundaries – Hindu Temples in Pakistan

Without Boundaries – Hindu Temples in Pakistan

The Indo-Pak cricket war has brought into limelight some of the temples that still exist in Pakistan and have been shown on TV. In the thaw generated by people to people and cultural exchanges between India and Pakistan, four Secular Pakistani artists were invited by Shumita Didi of Eclectica in collaboration with Anhad to show their works in Delhi. The artists had come under the aegis of Lahore Chitrakar, which is a studio and gallery established in 2001 by a group of painters, musicians, writers and theatre workers to revive and preserve the tremendous tradition of classical music, visual and performing arts. The town of Wazirabad in Pakistani Punjab, is known for its Hindu Temples and Sikh Gurdwaras. After the Babri Masjid incident some miscreants tried to attack these Temples and Gurdwaras only to be dissuaded by the people of the township led by Hafeez Khilji, a Poet and a political activist. 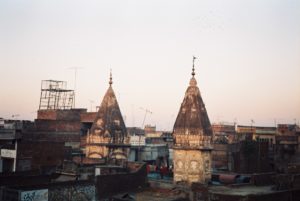 Above: Hindu Temples In Pakistan

Muhammad Imran, a photographer and an active member of  ‘Save Apna Wazirabad’ a project aimed at documenting and preserving the historical buildings of Wazirabad. His  body of work, on display  portrayed the present state of historical buildings and drew attention to the need to preserve that heritage. Akram Varraich is freelance photographer from Wazirabad. His main area of interest is the portrait; he possesses an ability to draw out the human and innocent aspects of the common folks. The work which he displayed in the exhibition were based mostly on the images of Hindu and Sikh temples in Punjab, Pakistan. Some of those works can be seen in this article. Shadi Khan is a labourer from Wazirabad, Punjab who started wood carving when Varraich gifted with carpentry tools. In his spare time he makes carvings of secular themes. Among his works one saw Christ on the Cross and a Gurdwara. The characters and situations from folklore are his primary choice for carvings. Shahid Mirza who is the moving spirit of ‘Lahore Chitrakar’, conducts painting and drawing class. He is a graduate of’ National College of Arts (former Mayo school of arts, as sister school of J.J. School of Arts, Mumbai). Mirza believes that the famous folk character of Ranjha in the ‘Heer-Ranjha’ romantic duo is inspired by Krishna’s persona. Like Krishna, Ranjha too was a flute player and a cowherd whose soulful tunes made the cows dance with joy.

Probably the most focussed work was of the Dawn Photographer, Azher Jafri, Chief Photographer, Dawn and Lahore representative of AFP. His works reflected the plight of the underprivileged and the struggle against oppression in Pakistan. There was a picture of anti bomb protesters after the Nuclear blast in Pakistan. A very dramatic picture was of a temple supposedly built pre-partition by Motilal Nehru in Shalmi market, being razed to the ground. A pic of Zulfikar Ali Bhutto’s wife protesting after her husband was overthrown. To end this article – an amusing tailpiece – a picture of a poor and naked child, which was handed to a newspaper by Jafri, appeared in the paper next day, but the kid – merely two year old – was wearing an underpant. That’s self censorship for you!