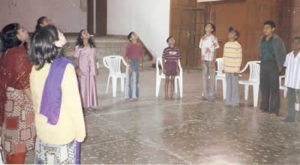 When summer comes, can summer theatre workshops be far behind?’ is a question that the English poet Shelley could well have asked, had he been in Delhi this summer instead of roaming around Florence one autumn some centuries ago. That’s the question he would certainly have asked had he been a Delhi parent facing a prospect far more unnerving than falling leaves, storms and winter shutdown — the prospect of kids moping around at home all day, each day of the vacations, with nothing to do. The question that Shelley did ask in his ode to the west wind (“if winter comes, can spring be far behind?”) seems far removed from parental anxieties, but it really isn’t. Well, in at least one respect, it isn’t. Both questions – the one that he asked and the one he didn’t – promise deliverance by embedding solutions in the very phrasing of the problem. If winter can be quickened by the prospect of spring, summer can certainly be lightened by a slew of theatre workshops that pop up from nowhere. And, considering you get theatre workshops in summer in a way that you can’t get spring during winter, summer is obviously the sweeter time.

Enough on the Shelley front. The thought of that poet as an anxious guardian, rushing kid to a morning workshop after talking intimately to the wind the previous evening, is neither inspiring nor pretty. Let’s just talk about ordinary parents, people like you and me.

The theatre workshops I speak of are obviously meant for children. They aren’t for adults. Or, are they? Stroll into any of these workshops on ‘admission day’ and you’ll sense tension in the air, as though it’s school-admission time. Of course, it’s only a summertime course…, it’s got nothing to do with academic performance, marks and all that…, it’s just fun and games, doing something creative, y’know… — and so, there are smiles all round. Then, out pop questions that give the game away. Many questions; take your pick. My favourite: ‘How many seats do you have?’ Fortunately, the kids are usually oblivious to their parents’ increased pulse rate, but you need only look at the parents to recognise the theatrical cheeriness oiling their smiles.

Why? I’d love to believe their tension reveals an improvement in the way theatre is regarded today. Perhaps the media revolution that everyone’s talking about has rubbed off some tinsel onto the theatre too. Then again, perhaps not. For, how many of these parents see that five-hour input each day for the next four weeks as intrinsically valuable to their child’s emotional and mental well-being? Put another way, how many of these parents will extend this vacation-time regard for theatre activity into taking the child to watch plays, enabling her participation in productions, and adding rehearsal schedules to the domestic timetable? In most households, theatre is just another horse on the merry-go-round that spins to life every summer vacation. If it was ‘music’ last year and ‘drawing & sketching’ the year before, it’s going to be ‘swimming’ or ‘tennis’ the next year, and so on. Children just have to be kept gainfully employed. Remember that saying about idle minds and the devil’s workshop? Well, better a theatre workshop than the other one, right? Is that the reason why there’s so much tension at registration time – horrors, what if the kid doesn’t get in and has to stay at home?!

OK, I know these are uncharitable thoughts. I mean, it would be nicer to discover they are uncharitable rather than true. Moreover, it’s better to draw such conclusions from the sudden influx of children into summertime drama activity than nurture silly fancies about the increased acceptability of the theatre. At any rate, my lack of charity can hardly wreak damage on parents, not when they do a better job themselves – as one mother did when she advised a workshop instructor to give the children some homework “because children like homework and that’s the way they’ll take the workshop seriously”. (And, as she of course neglected to mention, keep them out of her hair at home as well!)

Don’t misunderstand me: I’m all for theatre workshops. I just happen to be somewhat sceptical about their seasonal popularity, that’s all. In fact, I’m more afraid of the other kind of parent, the one who pursues ‘Theatre & Drama’ with a vengeance and is convinced that workshops can’t be up to much if these don’t end with large-scale productions (simple demonstrations of work-in-progress being no substitute whatsoever!) somewhere in the Mandi House area. Preferably at the Kamani, that mother of all auditoria where parents and kids are accommodated in large enough numbers for productions to be financially rewarding; and where the sense of occasion is large enough for it to not matter whether your child is intimidated by the size of the stage or has been reduced to a speck in the multitude. As long as the music is sufficiently amplified to sound impressively loud (even if drowns out the children’s voices in the process), and as long as munchies are allowed into the auditorium for the convenience of little brother, elder sister, distant cousin, not so distant neighbour and grandfather, all’s chunga with the theatre.

The best theatre workshops avoid such productions like the plague because these end up hijacking the entire workshop schedule, de-focusing and subordinating work done earlier into a mere preparation for this ‘real’ event to come. Yet, most people prize productions very highly, perhaps because they pander to the exhibitionist streak that lurks within most of us. But, productions make very poor learning environments because they do not allow free play to creative discovery. As productions require specific inputs, the child’s learning curve is limited to the range of demands made by the particular play and its staging method. There are other hurdles. Acting opportunities in most plays stratify into major and minor roles unlike workshops where all creativity is placed on an even footing. Once a hierarchy is introduced into the playing area, vital exchanges of trust and exploration are irreparably altered. Also, because productions are expensive affairs, children tend to be instructed and shepherded much more closely in prescribed routines. As a result, in striking contrast to the freedom they possess in the workshop scenario, children’s participation in plays usually amounts to their following directions, with the emphasis being on coordination and doing as they’re told. Now, doesn’t that sound suspiciously like school?

Of course, not all children’s theatre works this way. The best plays facilitate children’s contributions and in fact revolve around them. But, all said and done, there is no better way to introduce children to the power of make-believe than to lead them through a workshop method of open-ended games and exercises that tap the essentials of theatrical creativity. Games that encourage alertness, spontaneity, sharing; games that teach you to trust and be worthy of it; games that persuade you to understand and respect difference. These games can be structured as rhythm, acting, story-telling or vocalising exercises, each performed according to one’s ability, with no benchmarking, no standardised or objective criteria, except perhaps honesty.

Does all this make the child a better actor? I don’t think so. But it gives the young person the skills that help make a better actor, whenever he or she may choose to try that option. In the meanwhile, it helps mould the child into a more articulate, analytical and compassionate being. Sure, s/he will still be capable of slipping down some dark hole of self-interest and pettiness, but this time with a greater awareness of self. (I can’t believe it: I’m making the ordinary theatre workshop sound like one of those religious groups promising you higher consciousness…. Worse, I’m making it sound like a ‘personality development’ programme!)

That’s another magic mantra. ‘Personality development’ is the bait most commonly found in advertisement flyers of programmes, especially in those where no one’s sure of the benefits of what’s on sale. It’s a trusted market mantra because it’s nebulous enough to escape definition and therefore accusation of fraud. It’s trotted out as a universal benefit that accrues from all manner of activity. If you were to go by the ads, you’d find personalities being developed from horse riding – whose, the horse’s or the rider’s? Help! – to swimming. Frankly, the only way I see swimming help in developing personality is if you paddle into the deep end of the pool with only the class bully for company and the coach nowhere in sight. Weight-reduction programmes have also started promising personality, presumably on some scientifically charted kilogram-shed to character-sparkle ratio. And pandering to the beauty that lies in the eye of the beholder….

Sadly, many theatre workshops exploit the market similarly by positioning their theatre exercises as aimed towards ‘personality development’. Sure, participants in theatre workshops do experience a new-found quickness in step, a steadiness in the voice, and a boldness of eye. These are inevitable changes, given the sustained interactions in fictional settings and real environments to which the children are exposed. But, does all this add up to ‘personality’? I’m not sure; for, the ‘personality’ peddled here is understood as external poise, an acquiescence in socialised charm. Theatre workshops, on the contrary, do not pander to acquiescence. Instead of encouraging you to worm yourself into the eye of your beholder, the best theatre workshops teach you that the gaze most worth cultivating is your own.

For me, the most telling evidence of the usefulness of children’s theatre workshops has lain in an instructor’s rueful comment that a week or so after the workshop sessions began, parents came to him with the complaint that “bachche bigadne lage hain”. Can there be any process more precious than as this, a process that equips its participants to break free of the rules of docility and obedience that shroud our children?