Kanchan Chander: A Woman Artist of Vision by Seema Bawa 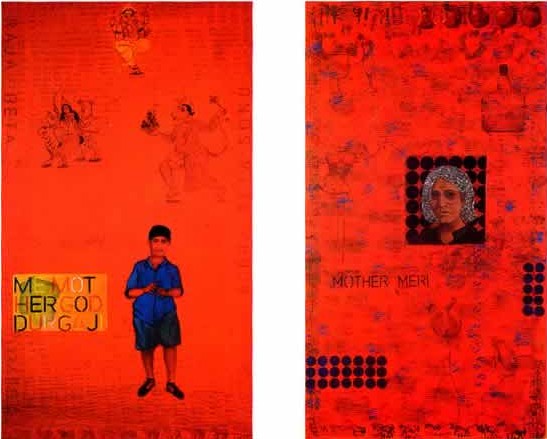 While most art is influenced by the personal history of its creator, Kanchan Chander’s paintings are her personal history; from student to artist to hopefully married and then joyful mother to estranged wife and then a single mother. The three decades of her paintings reflect and reinforce these states, and are emotively and expressively explored through her art which is not only visual but experiential.

In her early sketches, the impact of a brother’s death on her and her family are delved into. In Drifting Apart two female figures, her mother and she, cling to one another in shared grief while the male figure, the father, stands alone masking his sorrow.

The angst emerges again in her etching Expression II, a feminine interpretation of Edward Munch’s Scream. The contorted female face with a wide gaping mouth from which a silent eternal scream seems to be emerging is a very powerful image that is a testimony to Kanchan’s early potential.

In the first decade of her artistic journey she concentrated on print making especially etchings, lithographs and woodcuts. It is in the latter she uses bold, almost rough strokes to match the thematic of primitive primordial relationships and identities. Using archetypes from African and Polynesian tribes, she has posed a couple where the female figure stands with her legs crossed while the man stands in a hieratic pose, neither looking at each other, emphasizing an estrangement despite the intimacy of nudity.

During the period of her estrangement from her husband she painted on window, frames doors and furniture, which came out from her parental house (which was being rebuild) where she had to move in. As if painting on the dismembered utensils of her life and through this process reassembling her “self” under a dramatic new aegis.

Her signature work that emerge out of her re-assertive new female “self” are voluptuous female torsos. Sensual, confident and centered these are projected in bright feminine colors such as pink orange royal blue. Over a period of time she has experimented with ornamenting the torsos with so called feminine accessories such as sequins, beads, gold and silver foil; unapologetically emphasizing and celebrating the ornamental, alamkara and also the physicality associated with womanhood. In contrast the relatively later male torso,  Male/Nail are superimposed with symbols of masculine power and violence such as hammers, saws, scissors and knives.

Simultaneously she used the iconic symbolism of Indian Goddesses in her paintings such as Durga and Me in which she has juxtaposed the three eyed dark Goddess, with a red tongue hanging out seated on a stylized lion, with various profane motifs of masculinity.

During the next period came her series, Pallav’s world, which she painted with mixed media on takhtis representing the child’s world of school, play and homework. The use of motifs such as alphabets, kitschy popular heroes and boyhood ideals such as the cartoon character of He Man, emphasize the environment in which the mother and child dwell.

In her recent works two thematic trends are obvious. The first continues from her earlier Vatsalya series through which she had expressed the bonding between the single mother and child; now the roles seem reversed in What’s your POA, MAA where the child standing behind her seated self portrayal seems a young adult, protecting her.  The second trend is a more settled, peaceful portrayal of flowers and Buddha’s head, with of course some hint of disturbance, with an overall coming to terms with life, desire and expectations.

The show significantly highlights the works of a woman-artist who is comfortable and indeed assertive of this dual identity. Though she and indeed her work are not radically feminist with a rejection of all that is male or seeking to glorify only the female, there is a refreshing and unapologetic delving into feminine,  domestic and maternal concerns and sensibilities in her art.