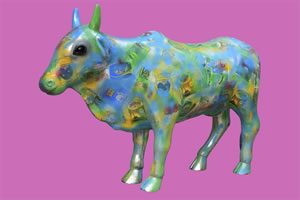 It was an event to which the whole city was making a bee line. Art lovers, critics, artists, curators – they were all there. And why not. An artist and a Curator were resurfacing after a long time.

Sidharth, the mystic artist returns to the public gaze after a gap of some years with his much anticipated show, The Decorated Cow, curated by StageBuzz’s art columnist Seema Bawa and presented by Religare arts.i from March 13th to April 13th at the Religare arts.i gallery.

For this show Sidharth has executed paintings, drawings and sculptures based on the continuum of the traditional and contemporary relationship of human beings with,  India’s sacred animal, the cow. On one hand the works view the cow in mythological, historical and socio-religious contexts where the Bull and the Cow are revered, adored and granted an intimate space within the household. On the other side, the post modern man has removed the cow from this space and created a disjuncture not only with the cow but the ecology and the world of nature she represents.

Kamadhenu, Surabhi, Nandi-symbols of prosperity and joy; the pastoral pleasures of Krishna’s cow; the cow in nature; the cow lost in the urban jungle, wandering on heaps of rubbish; the cow as the source of dairy and meat products, pumped full of chemical enhancers and pumped out of milk- all wander in the Sidharth’s canvases and consciousness.

The show thus, is a powerful commentary on the consumerist society and its greedy, all devouring need for material comforts. In the process the human is encroaching on the space of fellow inhabitants on earth, leading not only to an ecological disaster but to a dislocation of the human from traditional, philosophical and ethical moorings. The show interrogates this dislocation that has left the cow desacralised, abandoned and exploited.

This process has been highlighted by the comments of writers, such as Aman Nath, Vandana Shiva, Anirudh Chari, Kishore Singh, K Bikram Singh among others, on the cow in Sidharth’s art in the catalogue and the show. Thus, there are multiple voices dialoguing with the image created by one artist from varied vantage points, be these anthropological, ecological or cultural.

The colours in the paintings are fresh and luminescent. Sidharth has an intense and personal relationship with these colours, which is not surprising given that he makes his own colours using mineral and plant sources. The sculptures in the show provide a vital focal point given their three dimensionality and versatility in terms of size and materials used, ranging from marble, cowries to transparent fiber glass. The contemporary and mystical concerns centered on the cow have been amplified in a short film and music composed by the artist that will accompany the exhibition.

Sidharth’s art while deeply rooted in philosophic tradition contends with modernity in terms of tradition speaking to contemporary concerns.The artist, as an ecologue and cultural conservationist, dialogues with the contemporary world using the cow as a metaphor; cow is the projection of human thought, cow is a symbol of human psyche, cow is earth- the nature out there which man seeks to bend to his will.