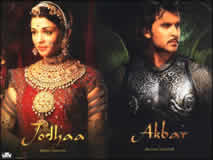 The historian in me could not resist having a dekko at a historical romance based on a character such as Akbar, who indeed is a larger than life figure of world history. A man of vision, statesmanship and great depth Akbar was the Insaan-e-Kamaal of his era. Hrithik Roshan as the young Akbar indeed does not disappoint even though in terms of physique he does not match the descriptions of the historical Akbar. The scenes depicting his valour, strength and prowess in battle, though competently performed are not exceptional. It is the sheer regalness of his bearing and the small details such as the fluid and effortless movements with which he sits on the throne, an act which requires immense theatrical perfection, that help him make the character his own. The scene showing Akbar getting into a trance while listening to mystical music of Sufi dervishes is authentic to the sources and enacted with great felicity. Aishwarya Rai as Jodhaa is right out of Mughal-Rajput miniatures paintings in her stance, apparel, ornaments and indeed her entire external persona.

The character of Akbar is better delineated because of the wealth of source material available, much of which is hagiographic in nature. That is not to say that the counterview was not available as is seen from the killing of Adham Khan Akbar’s foster brother. Other aspects of Akbar’s prowess such as his exceptional skill as a bare-hand fighter, his dueling an elephant, his consulting philosophers of other faiths; all having basis in historical sources ring quite true in the film.

Jodhaa, on the other hand, being largely a figment of the writer-director’s imagination, has been conceptualized with less depth. The single character trait that has been reiterated is her spirit, and her spirited resistance to patriarchal values which while anachronistic to the period depicted, is also quite tedious. Her depiction as a Rajput woman of honour and integrity is overstressed.

As for the characterization of secondary characters, unlike Lagaan, in Jodhaa Akbar this aspect has been largely ignored. Instead we have stereotypes paraded as Rajput Ranas, and good and faithful courtiers such as the Khan-i-khanan and Todar Mal versus fanatical ulema and scheming relatives. The entire structure of Mughal aristocracy, the mansabdars, so significant for the actual and visual construction of the Mughal era, is overlooked.

The film succeeds in reconstructing the sense of architectural spaces of the grand Mughal era, especially the Diwan-i-Aam. The battles and the epic scale are well done even though the armies rush towards each other rather than in formation.

The music of AR Rahman goes well with the film but does not stand out. The background score though is excellent.

The film is at one level an elaborate seduction of the spirited though mono-dimensional Jodhaa by a rather desirable Akbar. The plot is entirely based on coitus-interuptus, which is interrupted ad-nauseum where the consummation is heartily to be wished for so that one can finally go home. The sexual tension is very well structured and indeed works very well but for the length it has been stretched out. The political intrigues and the romance appear to be yoked together by violence and are not linked organically. Indeed they should have been two separate films.

Perhaps the entire relationship of Jodhaa and Akbar should have been read within the context of sexual politics that underlay the harem of the Mughals, which could have served as an interesting back drop to the delineation of Emperor Akbar, arguably the greatest monarch and statesman this land has seen. We know that Akbar had at least two wives (besides many concubines) before he married the Rajput princess. The Rajput princess, whatever her real name may have been, would have been competing with them for her Emperor’s favours and allusions to the same may have made interesting viewing. Instead the harem intrigues center around her conflict with Maham Anaga Akbar’s foster mother whose importance had waned by the time Akbar attained adulthood.

The film is largely didactic in that it addresses issues of shared cultural heritage and communal harmony without appearing to preach. The historicity of Jodhaa/ Harka or Jia Bai is irrelevant to the film.