Baghdad Burning – “We are accused of terrorism:”

Baghdad Burning – “We are accused of terrorism:”
A review by Jai Chandiram 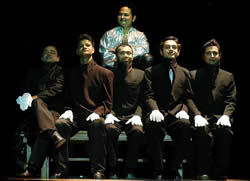 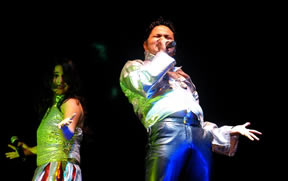 Thundering sound of warplanes, bombs , distant cries  Ebrahim identifies the plane, whose plane, the type of bomb, and the  and the area of the fall . Ebrahim  tries to get Rahila into his game . from his  dimly lit stark underground shelter . Suddenly the tank sound outside the door puts an end to the guessing and makes the group scurry with their water bottles to the shelter and the anxious wait for the knock on the door, the usual harassment by the soldiers which must be received with humbleness of a conquered nation ..Riverbend records the  spirit and destruction of the war on  Rahila , Mama , Baba , Aban and many others .  Multiple roles by a cast of twelve and excellent characterisation makes this piece of theater a moving experience. The blog of Riverbend (a woman)  vignettes the changes in the lives of women  who were free to study and work and the growth of fundamentalism  and its restrictions on their lives . The war leaves them without electricity and water … but the community continues to support each other through shortage of water and the daily routines for survival . They constantly  thank Mr. Bush for liberating them ! The minimalist staging of benches and white sheets which from the bedroom become  shrouds are visuals which will be seared in memory!

The dark humor of Mama as she takes the journalist through the shelter hit by a bomb   and now  a museum has the burnt out figure of a mother trying to save the child with her body , another woman her body leapt in the air as the bomb hits her and freezes her as a figure flying with the impact . Shocking images graphically describe the effect of the bomb on  400 people  chill the audience in a harsh reality of the war even though the telling is with embarrassed laughs .

A great play , well enacted and brilliantly staged with a  soundtrack that drumbeats into the soul with piercing screech of the bombs and the silence that follows . Grim with dark humor it describes the history of our times

… It feels like we’ve gone back 50 years ever since the beginning of the occupation. A woman, or girl,  out alone risks anything from insults to abduction .

We are seeing the increase of fundamentalism in Iraq which is terrifying .

“ Governing Council  is something of an interesting hobby – a nice diversion in a monthly routine : golf on Saturdays.. a movie with the  family in London on Fridays….. and yes nation building for 5 minutes with Bremer on the 10th of  each month .

And so Bush liberates and moves Iraq into democracy!
Based on the internet blog by Riverbend
Script by Supriya Shukla ( Hindi)
Design and Direction by Kirti Jain
Aaranjan in collaboration with  Zubaan , and Abhimanch , National School of Drama