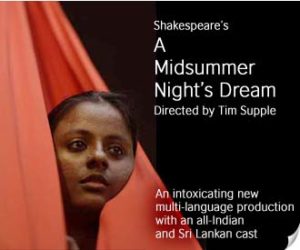 What is it about multilingualism that draws so many theatre practitioners to dabble in it, much like moths being drawn to a flame? And, what is it about multilingualism that makes many of them end up getting burnt by the encounter? Why is it that Tim Supple, who brought to India a perfectly competent production of The Comedy of Errors with the Royal Shakespeare Company some years ago, has ended up this time offering a version of A Midsummer Night’s Dream that makes all the right noises but falls woefully short of making sense?

Well, actually, not all these noises were politically correct. . Supple’s comments on intercultural collaboration (carried in the brochure that accompanied the premiere production in 2006) may have been a shade too driven by the enthusiasm of a ‘been-there-seen-that’ cultural traveller, but did he really think he would win friends and influence people by his description of Indian theatre as “less tangible, less modern, less structured than ours and often fashioned with basic design and rough execution”? However, win friends he did, as can be gauged from Ananda Lal’s comments (in that same brochure) about Supple’s work. Says Lal, “Knowing the debates [revolving around issues of ‘neo-colonial exploitation’ in ‘inter-cultural theatre’], observing him direct at close range and having asked members of the team, I can vouch for the fact that he is sensitive to the issue and its dangers. As corroborated by the performers…no appropriation occurred.” (Lal also goes on to claim that Supple as “a foreign director has achieved national integration for Indian theatre before any Indian could”, but I think we could let that pass as an instance of our Indian habit of being hospitable to the point of embarrassing everybody around!) The first statement is by itself a great Certificate of Merit, though it is difficult to fathom the authority with which assurances such as “no appropriation occurred” can ever be offered. Besides, the prospect of a post-colonial watchdog snooping around for evidence of appropriation during rehearsals can hardly be the kind of thing that leads to intercultural bonhomie let alone transparency!

Cordial and collaborative dealings in work processes don’t guarantee that the art thus produced will be free of appropriative relations. Plays aren’t exactly processed on a shop-floor where one presumes hygienic procedures will result in non-contaminated products. Nor are ‘appropriations’ tangible actions that can be detected in the making, like embezzlements or fraud. You can monitor rehearsals all you want on CCTV, interview as many employees (read ‘actors, technicians, etc’) as you like, and still discover outcomes that are suspect in their negotiation of social and cultural identity. In other words, ‘appropriations’ don’t have to be rooted in malicious intent: often, the best-intentioned at heart still end up stepping into shit.

Take, for instance, Supple’s decision to go multilingual when asked by the British Council to create a production in India and Sri Lanka. He writes, “To restrict ourselves to performers who worked in English would be to miss out on a wealth of different ways of making theatre…. It would also be a lie.” How can one not approve of such sensitivity towards our situation in the subcontinent where – and we can speak more freely than Supple feels he can – the best way of making theatre is not to be found in our English language stage. So, his decision to grant performers the comfort of working in their own languages led inevitably to Midsummer being conceived as a multilingual production. Though Lal is right in noting that “in the West, multilingual theatre has become fairly common, particularly in international projects”, it is important to recognise that Supple’s decision to go multilingual has been prompted less by the project’s ‘international’ status than by his wish to make it accessible to the broadest swathe of performers. Not to mention his need to give the Shakespearean text its due: as he says, “whatever else a Shakespeare production might do, it should seek to reflect the time and place in which it is made with vivid honesty.”

Laudable as this may sound, how true is it of Supple’s own work with Midsummer? Does its multilingualism, which lies at the heart of this intercultural project, reflect anything at all, let alone with vivid honesty? Midsummer has several languages – English, Hindi, Marathi, Bengali, Malayalam, Tamil and Sinhalese – operate indiscriminately in performance, cropping up and dropping out without evident purpose or necessity.  With some characters speaking primarily in one language and others switching between languages for no apparent cause; with no patterns being discernible in the connections drawn between situation, character and the language/s used, Supple’s multilingualism add up to little more than a noble-hearted linguistic egalitarianism.

Egalitarian motivations of this sort can’t take you far, especially if none of these languages is textured as a living, cohabited entity. The idea that languages are grounded in socio-cultural spaces and are imbricated in personal identity, that they shape memories of shared pasts and imagined futures, that they are as much bones of contention as means of contestations — none of these, on the evidence of the performance, seems part of Supple’s plan. His production sails through the melange of tongues without once indicating that the bewildering mix of words and accents amount to anything more than a log of semantic equivalences. As a result, Midsummer’scharacters are reduced to merely speakers of many tongues, and its text flattened to opaque displays of ‘otherness’, which lack even the resonance and difficulty that negotiating the ‘other’ brings in its wake.

Surely, a multilingual theatre has to foreground language as vital to its meaning, else why should any theatre strive to move outside the confines of its single, original language? An advantage with monolingual theatre is that when all characters speak the same tongue, it is possible, as writer Manjula Padmanabhan has averred in relation to her play Harvest, for the language to be divested of social and geographical referents and to that extent become ‘invisible’. (Writers then turn to vocabulary and intonation to bring in the desired social textures.) It is when two languages are made to coexist in the same text that questions arise as to why a character speaks in one and not the other language; questions that need to be answered even more urgently when the same character is seen to shift from one language to another.

Thus, multilingual productions pose issues of naturalness and probability in a deeper vein, and in the process demonstrate their potential to handle richer representations. But for that to happen, their discrete languages need to be tagged for difference and located in a socio-cultural hierarchy, in the same manner as these operate off-stage. If, as in Midsummer, the various languages on show are offered in a non-problematised, unified terrain, then I’m afraid this ends up as an aestheticised unity of the most banal kind.

Moreover, there seems to be some confusion here. Sure, Indian theatre is multilingual, as Supple claims — but only to the extent that India, by virtue of being a multilingual nation, has theatres in many languages. Texts, however, continue to be written and played mainly in a single language (including regional variations and dialects does not a multilingual theatre make!). Few theatre pieces shoulder on their back a hold-all of many languages for the simple reason that audiences aren’t multilingual – at any rate, not in the broad range that Midsummer imagines. How does a multilingual theatre work then for audiences when its text is segmented into distinct clumps of speech which are alternatingly inaccessible to spectators (as they surely also were to the other actors on stage)? It’s ironical that Supple’s inclusivist gesture towards the individual actor ends up as an exclusionary experience for his spectators.

Not that the production is scrupulously caring about its actors either. For a project that kicked off with a view to enabling the non-English speaking performer, it is strange to see almost every actor in Midsummer speak in English at some point, regardless of that actor’s comfort with the language. I have no clue as to why this happened or what it is meant to achieve. All I do know is that the thick, regional intonation of English speech in such cases showed up speakers in a poor light, and left one silently willing the actor to retreat into the comfort zone of his native tongue!

As for the claim that multilingual theatre is the theatre of the future, let me point out two small cheat codes embedded in the zone of the multilingual. One, most multilingual theatre tends to remain closeted with the classics. In other words, with such plays where spectators’ familiarity with the text functions like an insurance policy because it neutralises the risk of incomprehensibility that is inevitable when languages are used in a manner that makes them only selectively comprehensible to audiences. Two, most multilingual theatres tend to favour designs that have strong visual components and a physicalised performance style as staple features of its performance grammar, as if this is one way of working around the fact that large portions of the text may remain unintelligible to audiences. Compensations of this kind clearly signal that multilingualism of the kind favoured in international projects today is primarily a gesture towards inclusiveness and tolerance. And, like most gestures, it is unfortunately little more than that.