Delhi’s Amateur Theatre – Will it weather the storm or wither? (Manohar Khushalani)

Delhi’s Amateur Theatre – Will it weather the storm or wither? 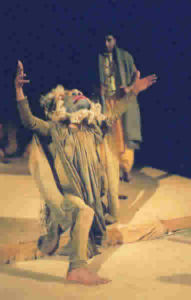 It has become a matter of great concern amongst theatre lovers of Delhi as to whether amateur theatre will survive in the coming decades. An occasional performance in a packed auditorium builds up expectations of resurgence in the amateur theatre movement. In Mumbai and Kolkata there have been traditional theatre audiences. People do buy tickets and actors do get paid in those cities. About Delhi, one can say that the only culture that interests the city dwellers is either horticulture or page-three-party-culture. However, boredom with television has also led to some audience revival. But will Amateur theatre be able to support this need for cultural gratification from live performances? In the seventies and early eighties the actors who populated amateur theatre groups were intellectuals or radicals. Badal Sircar’s influence was strong and street theatre movement was at its peak. The NSD actors after graduation were doing theatre and the combination of intellectual amateurs and NSD  full timer was deadly and imbued vitality to the atmosphere. Street corner discussions at the NSD fruit shop and late night discussions over a glass of beer or a peg of rum was the order of the day. Even JNU and Delhi University were pumping in radically oriented and committed theatre people, audiences were growing. Spirits were really high. Those were really happy times. But then came the onslaught of television and cinema. What started as a trickle with the departure of Shiv Puri, Om Puri, Naseerudin Shah and Raj Babbar, became an exodus as Sudhir & Sudhanshu Mishra, Neena Gupta, Alok Nath, Sushmita Mukherjee, Ravi Baswani, Lalit Tiwari, Manohar Singh, Surekha Sikri, Ratna Pathak, Pankaj Kapoor, Ranjit Kapoor, Anu Kapoor and so many others trooped out of India Gate and flooded into Gateway of India. Amongst the well known names only Manoj Bajpai, Saurabh Shukla, Sudhir and Sudhanshu Mishra were from the amateur theatre all the rest were from the NSD.
“What has NSD done for Delhi Theatre, every NSD graduate is only interested in Television and Cinema” says an amateur actor. “It is we amateurs who have kept theatre alive in Delhi”. Perhaps he was right, except for Piyush Mishra; nobody from NSD was active in Delhi theatre. But, of late, the recent pass outs such as Rabajita, Swanand Kirkire, Gautam Sonti, Ajay Kumar, B. Gauri and Kalyani Hiwale have contributed to the theatre movement by working with amateurs.

Arvind Gaur felt that the word amateur had disparaging connotations. “Yes, we work with amateurs but our approach is professional,” he quipped. Satyajit Sharma an NSD graduate, practicing actor in Bombay, who was active in Delhi Theatre, recalls with nostalgia his amateur theatre days and agrees with Arvind Gaur’s contention. “Of course it is qualitatively professional but it does not pay”. Since I have passed out from NSD my attitude has changed. Even though I belong to Delhi Theatre, the point is that I have to make a living from acting and in Delhi that is not yet possible. Though I still love theatre and perform occasionally as a stage actor as well”

But what about doing theatre in Bombay? According to Satyajit, any student who suggests that is ridiculed by his colleagues, because, for them media was the thing. However, ridicule not withstanding some NSD graduates like Naseerudin Shah, Sushmita Mukherjee continued to do theatre even though they found work in cinema and TV. Recently Neena Gupta too has made a return to theatre after so many years.

An amateur actor wanted to know what the definition of Amateur Theatre was before he opened his mouth. When he was told that an amateur is one who does not use theatre to make a living, he agreed with the definition and disagreed with Gaur’s contention. “It is only amateur theatre which has kept theatre alive, not only in Delhi but anywhere in the world,” feels Feisal Alkazi, director of the oldest Amateur theatre group in Delhi – Ruchika. Feisal has been regenerating his group by working with children in his Little Actor’s Club. Earlier he used to infuse fresh blood through Music Theatre Workshop. Kiran Sharma who works in a Children’s theatre group found that the greatest supporters of her theatre were parents of children who participated in their workshop. Feisal Alkazi finds a much greater awareness about theatre amongst college students. So maybe the hope lies in the new generation.