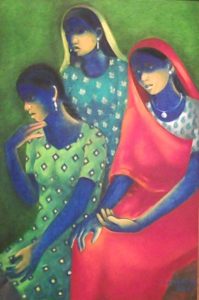 This year has been designated by the UN as the Year of Women. To kick start the celebrations on the International Women’s Day, prominent women artists from across the country came together to host a unique festival, curated by Radhika Srinagesh of The Chemistry of Colours.  The festival was in form of an Art Exhibition at IGNCA’s Mud House and was unveiled by Bhavnaben Chikhliya, The State Minister of Culture & Parliamentary Affairs.
It had three sections; ‘Women by Women’ showcased a few sparkling examples of Indian women who have reinvented their personal space, to let their talent blossom fully in their art. ‘Colors of Courage’ displayed many examples of women whose creativity is not limited by the challenges
of physiognomy.Many of these differently able women lent a new unanticipated dimension to the world of their perception. But the piece de resistance of the show was the exhibition titled ‘Amrita Shergil– Revisited’. Top artists of India were asked to respond to Amrita Shergil’s “Three Sisters” with a painting of their own. Each artist’s response was either in empathy with the painting or with the artist. Most of them chose to reinterpret the work in a contemporary context. Which was interesting because Amrita, who is an icon for women artists of the new millennium was herself far ahead of her time. Amongst the people who played a stellar role in promoting this exhibition were Madhup Mohta of Mohta Foundation, Jijo Madhvan Hari Singh of Mantram Art foundation, Rajya Sabha MP, D.P. Singhal and Rahul Barua of South Asia Foundation. 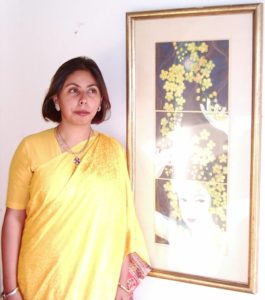 Above: The Curator – Radhika Shrinagesh

Centre stage of the exhibition was an Installation called ‘Garbha Gruha’ by Sangeet Gandhi, celebrating the creativity of women and linking the womb cell with the cosmos. Jijo Madhvan’s response to three sisters was to show them wearing masks that gave it a universality. It was the only painting accompanied by a poem “Roles complex, response varied, flight flight, stand up..” and perhaps be counted. Her other painting in the form of a Butterfly with a peacock feathered yellow blue orange, polka dots on wings bordered dark brown displayed the strength and resilience of a woman despite her daintiness. Iloosh Ahluwalia’s ‘Soni Kuri’ was a dazzlingly beautiful light eyed modern young girl in blue kurta and red chunni. Her brush work displayed a remarkable control on the craft and a realism which was almost photographic. Vibha Desai’s ‘Elen’ was a nude woman sitting on a fur almost empathising with the sensuality of Amrita. The lines were clear and economic. The form simple and direct. A large number of artist’s pulled out one sister from the crowd and used her to make their statement. Gogi Saroj Pal chose to use a computer and turn one of the sister’s inwards adding to the communicability amongst them. She looked at the third sister’s face in a concave mirror. Aparna Caur put the third sister in a spotlight, away from the other two. Pritam Bhatty gave the third sister a brush held like a cigarette reminding one of the famous Will’s Ad of the sixties “You’ve come a long way baby!.
Pritam Bhatty’s ‘View from the balcony’ displayed the artist’s ability to sense light. Artists’ whose work attracted attention include, Fatima Ahmed, Damyanti, Moeen Fatima, Shruti Gupta, Supriya Wadgaonkar and Lalitha Lajmi. Credit is due to Radhika for collecting so many artists under one roof in a memorable exhibition.