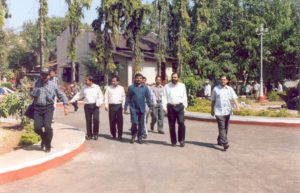 Tripurari Sharan, an IAS ranking officer took over as Director of Film and Television Institute of India in November 2003. Initially there was some scepticism in certain quarters that perhaps an outsider has come to poach on their territory. However, with passage of time, students and teachers have come to realise that he is not an outsider but one of them who has come with a certain passion to contribute to their world. WhenManohar Khushalani visited the campus he discovered peace and tranquillity prevailing in the campus. He also had a discussion with Tripurari Sharan, about his plans for the future:

MK: What were your first reactions when you came into the Film Institute, considering the past history of this place.

TS: Well I have been soaking in the environment. Learning its history. Getting to know a place first hand is different from hearsay. It has been interesting. I would not like to offer a value judgement at this stage

MK: What are the changes you are planning to bring about in the Institute

TS: We have already started a few new courses such as script writing and acting yet another course on animation is on the anvil. These will happen along with our regular Diploma courses which are the mainstay of our institute.

MK: I believe the earlier experiences with the acting course were not too good.

TS: Acting course was discontinued way back in 1978. Within ten days of my joining here, there was a festival at the Institute and I had an opportunity to interact with a lot of the ex-students and I got some inputs from them. Of course there were problems with the way the course was structured and the environment at that time. We have taken into account all those inputs and taken appropriate care. In fact a very responsible person has been made incharge of structuring the course – Naseeruddin Shah. Also Ravi Baswani who was associated with the Delhi Theatre group Non-Group and also has experience in film acting, will be conducting the classes.

MK: Also there were problems with the kind of students the course attracted – sons of rich businessmen who came only to become stars overnight

TS: That could be just one of the viewpoints, I would neither confirm nor deny it. In any case, our selection process is quite stringent. After the normal run of the mill tests and interviews we have a seven to ten day workshop, which helps us to screen out the kind of aspirants that you are talking about. We are also planning two scholarships for children who do not have the financial backing bur are capable.

MK: You studied in JNU when there was a great deal of radicalisation. How do you rate the students now?

TS: I would not term it as radicalism, rather the students then were more aware and had a  socio-political consciousness. The new generation is not as keen to get into the nitty-gritty of understanding the socio-political complexities. In the present phase of liberalisation and globalisation the students are in a rush to make money or to make a mark professionally. For that kind of intellectual excitement you need to be more laid back and reflective.

MK: Do you think that your being from the IAS cadre is an advantage or a disadvantage?

TS:. I wasn’t chosen merely as a representative of the Indian Administrative service. I am sure there were other credentials, such as having a certain sensitivity and sensibility, for which I was chosen for this job. Having said that, I would also put to you that having worked with the Government, I am more aware about the administrative and procedural complexities in managing a place like this. Since this Institution is totally funded by the Government it needs certain skills in dealing with it. That actually puts me at an advantage.