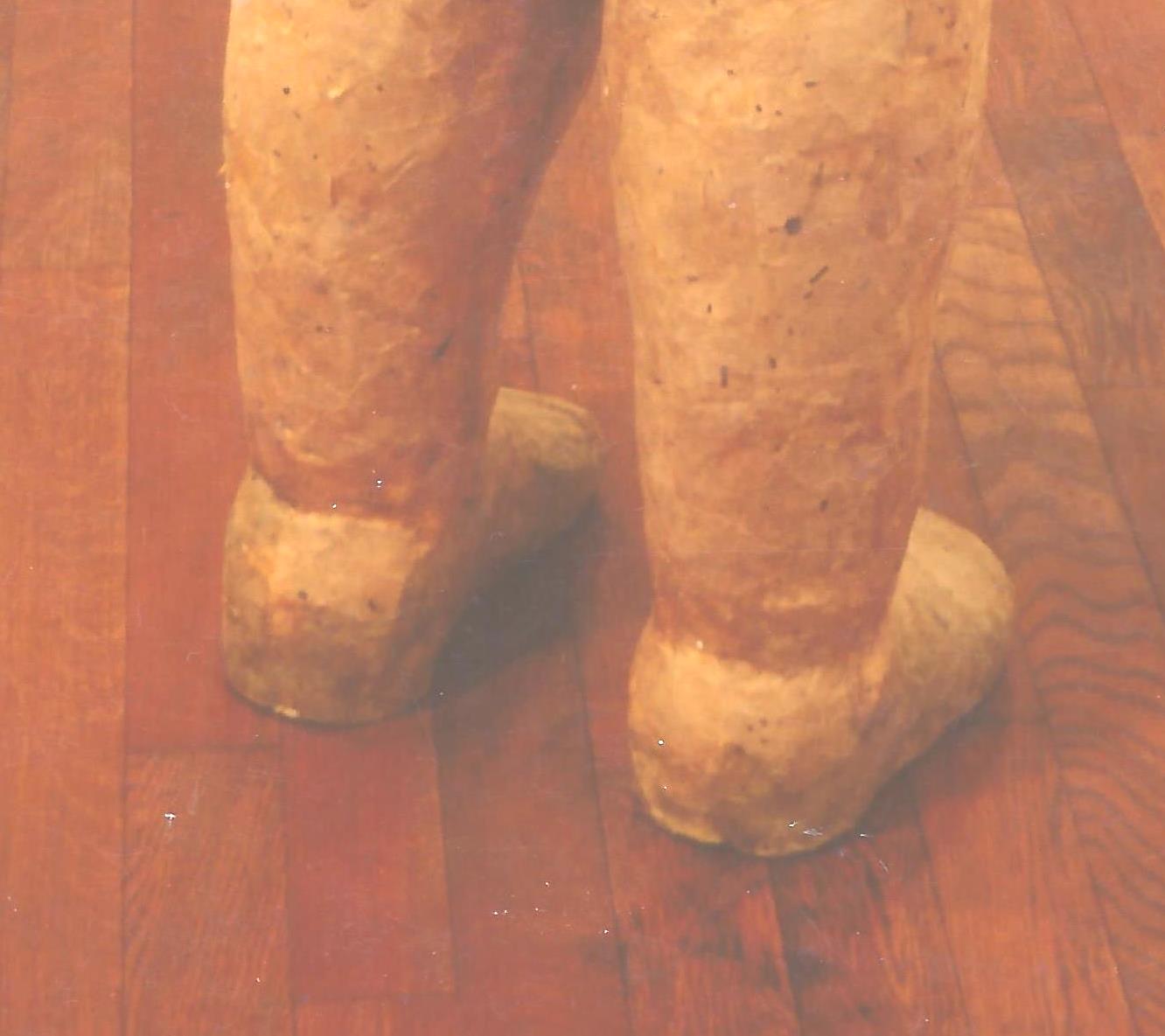 Life to Art (and back to Life)

I was amazed at the sheer simplicity of the innovation.

The problem resolution was ingenious. Footwear was cleverly adapted to be worn back to front, making the body of the man face the opposite direction to his feet.

A passing glance at this man walking on the street, comfortable in his skin, gave me little information as to whether his condition was congenital or was the result of an amputation (medically required or a deliberate act as in “Slumdog Millionaire”). Whatever the case may have been, it was certain that the pair of shoes he wore were of the same size.

The Making of the Sculpture

Carving a life-sized figure not only requires technical knowhow of how a form is to be sculpted and also the wherewithal (studio space, tools etc.) but most importantly a material that would lend itself to giving form and expression to the image you have in mind. I found a ready solution in the form of large blocks of polystyrene that were available in Tokyo outlets, easy to carve, lightweight for a person of my physical frame to move and manipulate as required.

When I made the sculpture and explained to friends and viewers that the concept of a man walking with his feet facing backwards was no allegory or a metaphor but something I had actually witnessed, few believed me – at least readily.

The sculpture shown below is a faithful depiction of my memory of the person I passed by in the street in as far as the main feature of “a man walking backwards” (seen from the point of view of the feet) is concerned.  But there are other metaphorical features to the form of the body, all of which are hidden at the back. They are revealed only when the viewer goes around the sculpture to inspect the feet. (Refer to note below)

NOTE: The Secret Weapons Hidden Behind

Art and Life are interrelated, one does not exist without the other and the two come together unexpectedly and at surprising intervals.

An example of this is a recent reference in digital media to the same issue that relates to my sculpture ….. (From Life to Art and back to Life)

On one of my many subconsciously motivated searches on Google, I one day came across the following photo article about Howie Desjarlais. It was now my turn to be taken by surprise.

I had witnessed a scene, I made a sculpture of the principal figure in the scene – the figure frozen in three dimensional form….and then, as if to reiterate the whole experience of me seeing and making of an image, I come across a document about Howie Desjarlias that indirectly pays homage to the life of the unnamed individual and to me an entirely anonymous person who I pass by on the street and who becomes the subject of my first life-size sculpture.

Provided below is the link to the article

” …he landscapes yards around Regina to earn money for his family, despite losing both of his legs from the knee down. (Cory Coleman/CBC)”

I trained as an art historian at the Faculty of Fine Arts, M.S. University, Baroda, worked as a researcher on contemporary art and published articles and essays on artists and art-related issues in New Delhi. Lived in Japan, where I used my bedroom as my studio and started making sculptures, while earning a living as a lecturer in ESL teaching at universities in Tokyo, developing methodologies for study of language and visual art. I am presently living in the U.K. working as an independent researcher, art writer, and a visual artist.