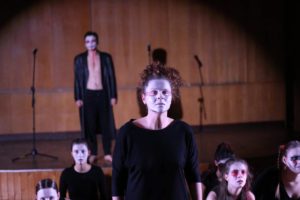 The Play
The play begins with two gods, Athena and Poseidon, descending from the heavens to discuss the aftermath of the war between the invading Greek armies and the people of the city of Troy. Poseidon has supported the Trojans, whereas Athena has supported the Greeks. However, she has now turned against them since the Greek warrior, Ajax, raped the Trojan princess Cassandra in Athena’s temple, which the goddess sees as an act of great disrespect. As a result, she has called on Poseidon, as well as Zeus, to work with her and create stormy seas to punish the Greeks on their journey home. The gods exit, and the mortal plot unfolds. The stage shows a tent with the recently enslaved women of Troy. Hecuba, the former queen of Troy, laments the destruction of her city, and the horrible treatment her family has endured. The Chorus, made up of her former handmaidens and other noble Trojan women, joins her, and together they sing, wondering what will become of them when Greeks will be their masters.

Director’s Note
The Trojan Women is based on the play by Euripides with the same title. This performance is an effort to understand tragedy as seen today, and to make the ancient text contemporary, but at the same time trying to keep traditions of ancient tragedy intact. Without the use of any props we are trying to create theatre with bodies, voices and psychological Russian theatre. It is an eclectic production with modern sounds and electric lights but with a deep and tragic soul. We are not trying to make the play’s situation similar to the contemporary problems, but we hope that the audience will create its own associations.

The Director
Vasilisa Tepliakova is a young director from Moscow. She graduated and post-graduated from one of the best theatre universities in Russia – GITIS. Nowadays she is working as a teacher and director in the Institute of the Theatre Arts in Moscow. She is a specialist in contemporary theatre with all her performances very different and experimental, not only with regard to the text but with regard to the audience as well. Her performances as a director are Dear Elena Sergeevna (2017), The Slide (Moscow, 2018), The Trojan Women (Yuzhno-Sakhalinsk, 2019), Yerma-Show (Moscow, 2019).

The Playwright
Euripides (480 – 406 BC) was a tragedian of classical Athens. Along with Aeschylus and Sophocles, he is one of the three ancient Greek tragedians of whom a significant number of plays have survived. Euripides is identified with theatrical innovations that have profoundly influenced drama down to modern times, especially in the representation of traditional, mythical heroes as ordinary people in extraordinary circumstances.

The Group
Institute of Theatre Arts’ Goloborodko’s Workshop is a group of young actors who are studying in Moscow in the Institute of Theatre Arts. They produce classical performances that are contemporary. The group’s method of acting is based on Stanislavsky’ system, with an attempt to deal with the psychology of the play while keeping it radical and contemporarily aesthetic.