Abhimanyu: The Legend of a Tragic War Hero / Manohar Khushalani

Abhimanyu, is perhaps a unique character in Mahabharata whose death brings you inspiration. Pandit Radheshyam Katahvachak’s Veer Abhimanyu, a play engulfed in deceit, treachery, misuse of power, and politics Directed by Hema Singh with NSD’s second year students had all the elements of a professional show, despite the fact that Hema intended it to be a teaching production. Interesting thing was that for a martial play the female students were playing the roles of male soldiers. At no point did one feel that the roles should have been played by males. The performance of female actors was as aggressive and bold as was required. Guru Salam Biswajit Singh’s Martial art training was so thorough that girls could match up to boys in the fight scenes. Also, there was rich use of elements such as dance, songs, Martial arts like Kallari and use of percussion and wind instruments (like nagara and dhol) to indicate the war hysteria. As the director explained, the main objective was to teach Parsi style theatre, therefore it was imperative to expose the students to all elements of it, including the melodramatic speech patterns which are so much a part of this theatre. The real challenge was to to work in this style which has a concept of dramatic action and is different from contemporary theatre.  The couplets and lyrical dialogues written in typical Parsi style required an understanding of rhyme, pitches, natgiri, gestures, postures, language and poetry. The source of Hema’s inspiration was B.M. Shah, who made her realise that the Farsi theatre is an unusual blend of classical Sanskrit theatre, folk theater and Victorian theatre. She has gone on to become a foremost proponent of this form of theatre.

The production, thus, tried to create a bridge between contemporary realistic theatre and the traditional Parsi Theatre, reinterpreting it in such a way that audience could relate to it as a modern production. 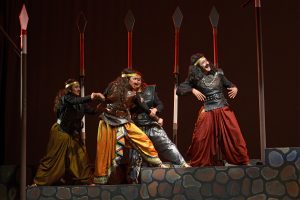 Farsi as Parsi theatre is also called, had a great historical relevance because of its contribution to the freedom struggle. The playwrights created feelings of patriotism, love, renunciation, and kindness in public by writing double meaning dialogues which only the natives understood. It raised voice against imperial rule. At that time, many Indian mythical, historical, courageous characters that fought against injustice, were featured in Parsi theatre so that self—respect and fearlessness increases in public. ‘Veer Abhimauyu’ is one such epic character,  whom the playwright, Pandit Radheshyam, brought to life. Legend has it that Abhimanyu was the re-incarnation of a son of the Moon-God- Chandra. When Chandra was asked to let his son incarnate himself on earth, he made a pact that his son will only remain on earth for 16 years, as he could not bear to be separated from him any longer than that. Abhimanyu was the most loved of all sons of the Pandavas, so much so that Draupadi was said to love him more than her own sons. Draupadi once said that if the Pandavas are not willing to wage war, then her sons led by Abhimanyu will attack and get justice for her and avenge her humiliation. Abhimanyu was trained in all types of warfare by Lord Krishna and Balrama themselves, and later by Pradyumna (Sri Krishna’s son). Abhimanyu learnt the art of breaking into the Chakravyuha when he was in Subhadra’s womb. It was then Arjuna was narrating the art of breaking into Chakravyuha to Subhadra. But he did not know how to destroy the formation once he was inside, as Subhadra fell asleep while listening to the story and (Abhimanyu in her womb) could learn only half of the technique. This is the reason why he was only able to enter and break but not come out of the Chakravyuha

That was the tragedy of Abhimanyu. The matchless youth who won immortality by his shining heroism in the great Mahabharatha war. Pitted, against the mightiest of the mighty in the enemies’ ranks, this warrior, barely sixteen, became the sheet-anchor of the Pandavas. The veterans ranged against him had to overcome him only by unfair means.

The production was ably supported by a competent team of theatre professionals. Souti Chakraborty’s lighting highlighted the dramatic elements with a blend of light and shadeow intermixed with mood lighting. Somesh PBs training of the martial Art of Kalaripayattu and Kajal Ghosh’s Co-Music Design deserve mention. In the design department Kriti V. Sharma’s costumes Vishala Mahale’s set gave value to the production. Kudos also to Hema’s blocking of the play which created the illusion of a giant battle field. It was indeed a memorable and meaningful evening laced with spirited performances of all the actors.