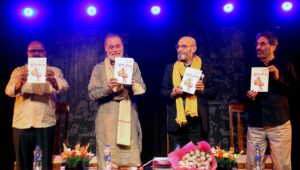 National School of Drama today inaugurated its, evergreen, much-awaited 11th Bal Sangam – a folk & traditional performing Arts & folk Theatre festival, at the lush green lawns of the campus amid much fanfare. Watch the film made on the occasion by my Digital Media students at IIITD: Sahil Yadav, Aseem Saini & Dilnawaz Ashraf

The opening ceremony was followed by Rangoli – a stage performance by Folk & Traditional child artistes of India, choreographed by renowned choreographer Shri Bharat Sharma, who has an illustrious career spanning over three decades.

Renowned Theatre Actor & Director, Prof. Ram Gopal Bajaj said, “Without relation and communication there is no world. Festival like Bal Sangam help building relationship among the children of different culture. Strong relationship and bonding lead to form a strong nation.”

Prof. Suresh Sharma, Director-in-Charge, National School of Drama said, “I’d like to thank everyone who managed to take out their valuable time to come here and give their blessing to the participating kids. I welcome all the participants and audience to this festival. We are proud that the TIE Company has been working hard to make children know about their own culture, traditions, and values. NSD will continue taking such initiatives in the future as well.”

Mr. Abdul Latif Khatana, Chief, Theatre-in-Education said, “Theatre-in-Education has been continuously trying to reach and touch the lives of children across the country in last three decades. Apart from folk & traditional performing arts and folk theatre, we conduct interactive workshops among participant children from different parts of the country.  The experience and exposure they get at such a young age, will definitely inspire them to do something in the field of folk and traditional performing arts and folk theatre in the future.”

Prof. (Dr.) Abhilash Pillai, Dean-Academic, extended the vote of thanks to chief guest, children and the audience for taking out their time and being a part of Bal Sangam.

Bal Sangam provides the platform for young talent who have never got chance to show their talent and whose performances have never been witnessed at national level. Long Man, Rajasthani Puppet, Behroopiya, and Magician etc. are the special attraction of the festival. Various types of art and craft workshops are also being conducted during the festival.

The Bal Sangam festival is an ensemble of various performing traditional art forms presented by children, with the objective of encouraging children to continue traditional performances so as to preserve our cultural heritage in this rapidly changing world. The fanfare and hub of Bal Sangam 2019 start from 9th November and goes on till 12th November 2019 at the New Delhi Campus of NSD at Bhagwandas Road. Timing- 4:00PM to 8:00PM. Entry to the event is free.